SOUTHERN PINES, N.C. – Power management company Eaton announced todaythat its Golf Pride Grips Division was the prevailing grip of choice by players at the 2014 Open Championship, played at historic Royal Liverpool. In fact, 122 of the 156 (78%) players competing in the game’s most storied major, trusted their games to Golf Pride grips.

“The Open Championship is widely acknowledged as the major contested in the most challenging of weather conditions,” said Brandon Sowell, global sales and marketing director for Golf Pride.  “With weather that can change from one minute to the next having grips that are versatile enough to handle the varying conditions are integral to a player’s success.   To that end, hybrid and full cord type grips can provide extra stability in the windy and rainy weather that players often encounter when competing in the British Isles, and no other grip company offers as many diverse cord and hybrid performance options as Golf Pride.” 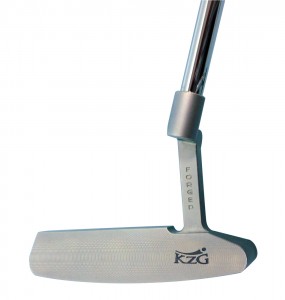 DS-1 Putter, The First Of The “Designer Series” Putters From KZG

NORTH HOLLYWOOD, Calif. (July 24, 2014) – KZG, the #1 Custom ProLine™, is introducing the DS-1, the first model in its Limited Edition “Designer Series” of putters.

The putter is the most used club in every golfer’s bag. Yet, so little attention has been paid to how it is manufactured, designed and fit for the golfer. KZG aims to change all of that with its new Designer Series program.

Each putter in the Designer Series will be designed by one of the Top 100 ClubFitters in the World… experienced and highly skilled fitters who have worked with many of the top touring professionals as well as average golfers.

The DS-1 was designed by Bryan “Buddy” Beem who has been rated among the World’s Top 100 ClubFitters for 9 years in a row and has had over 30 years experience working with touring professionals, head pros, avid golfers, university teams and junior amateurs. He is called “Uncle Buddy” by the top junior golfers in Colorado. Out of the top 20 players on the Colorado junior circuit, 15 have been coached and fit by ‘Uncle Buddy’ and they all play KZG. Buddy owns Buddy Beem Custom Clubs near Denver, Colorado.

In designing the DS-1, Buddy reports: “I chose a triple-forged process so that the putter is extremely responsive and helps my golfers learn to feel the subtle differences in the way they make contact with the ball. Over time, they will be able to consistently repeat their best strokes. And forged putters definitely are the easiest putters for making lie and loft adjustments, which is absolutely critical for a perfect fit,” he adds.

“The perimeter weighting on the DS-1 is designed for stability, the leading edge is cambered and the micro-milled face gives a clean, sharp roll for better control.” Buddy reports: “the whole set up and look at address makes it easy to just ‘point and shoot.'”

In designing the DS-1 putter, Buddy notes that “right-eye-dominant players need an offset neck and clear alignment markings to help them set up with the ball precisely in the middle of their stance. The DS-1 addresses this phenomenon, ensuring that the putter head will be square to the player’s target line as the ball leaves the face.”

“KZG works with its engineers, but we go a step further and rely heavily on design feedback from the finest fitters and teachers in the golf industry” reports Jennifer King, president of KZG. “We believe it is the professionals that are working with golfers day in and day out that are best informed on what the golfer needs for a better game. We are very appreciative of Buddy’s efforts in making the DS-1 such a great performing putter that is already gaining rave reviews.”

The Designer Series was created to cover critical variables in the stroke that are often overlooked by other manufacturers. The beauty of KZG clubs is that every design is conceived to meet the needs of a particular type of golfer.

Every DS-1 putter will be custom fit to each golfer’s unique specifications as KZG products are only available through KZG’s network of highly qualified professional teachers and fitters which are listed on the Dealer Locator at kzg.com.

Available in either brushed satin or matte black, the MSRP for the DS-I Putters is $299.

Tinley Park, Illinois, July 22, 2014, – Bettinardi Golf, maker of the world’s finest milled putters and other luxury golf products, claimed a top ten finish at The Open Championship at Royal Liverpool Golf Club, in Hoylake, United Kingdom. This Italian player was solid throughout all four rounds with a total of 277 strokes (-11) for the tournament. Putting with his Kuchar Model 1 arm lock putter, this player made 19 total birdies and finished tied for 7th at this year’s 3rd major championship.

“It has been amazing to watch this Italian player climb from 241st to 97th in the world over the last 3 months, all while using a Bettinardi arm lock putter,” -said Robert Bettinardi, President/CEO of Bettinardi Golf. “The top ten finish at The Open Championship truly shows where his game is headed.”