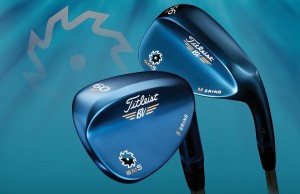 Master Craftsman Bob Vokey is adding a new, blue finish to his Vokey Design Spin Milled 5 lineup for the summer.

Vokey Design Spin Milled 5 Indigo wedges, available for a limited time beginning July 16, are plated and then treated with a special Indigo PVD finish for a unique iridescent blue appearance. The Indigo finish will wear over time and when used out of a bunker; however, the wedge will not rust.

“We’ve had the Indigo finish in WedgeWorks in the past, but only in the 400 Series. People went crazy for them,” Vokey said. “We took them to the PGA Show this year and everyone was gravitating towards the Indigo finish and asking us when we would offer it in SM5. Even some of the Tour guys saw it and loved it, so we’ve decided to put out a limited release.”

The M and S grinds, like all of Vokey’s SM5 grinds, have been derived from Vokey’s work with players on the PGA Tour.

The M grind is Vokey’s original tour grind and one he considers his “Most Favorite.” It features a crescent-shaped forward bounce sole and relieved heel, toe and trailing edge, along with medium camber and bounce.

The S Grind, a full sole with moderate heel relief and a medium ribbon ground along the trailing edge, was inspired by Steve Stricker, who likes to play his wedges in a square position with the shaft leaning away from the target.

“Steve has a shallow angle of attack, with little to no wrist action. The S Grind gives him the versatility to hit many different shots around the green, even with his neutral style,” Vokey said. “For players that like to rotate the face open, the M Grind is a very popular option.”

Vokey Design Spin Milled 5 Indigo wedges are available for a limited time through Vokey.com, with an MSRP of $185, including customization and personalization options. SM5 Indigo wedges will also be available at select U.S. golf shops. Golfers should call 1-888-TITLEIST for more information on availability in their area. 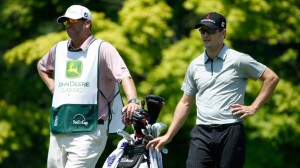 SILVIS, Ill. – Zach Johnson, Rory Sabbatini and Brian Harman shot 8-under-par 63s Thursday to share the lead after the first round of the John Deere Classic.

Johnson and Sabbatini played bogey-free golf, while Harman had nine birdies and one bogey on the par-71 TPC Deere Run. 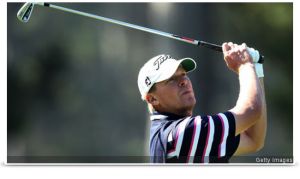 HOYLAKE, England (AP) – Steve Stricker has withdrawn from the Open Championship next week at Royal Liverpool. It’s the second straight year he has decided not to play as he cuts back his schedule.

Stricker was replaced in the field by Ryo Ishikawa of Japan.

Stricker last year began reducing his schedule to spend more time with his family. He thought about playing The Open this year, though it looked unlikely when he added The Greenbrier Classic to his schedule and his wife caddied for him.