TOUR SNSR CONTOUR is an evolution of the classic tapered pistol profile that is the shape preference of over 75% of Tour players. The pistol allows golfers to “lock in” their upper hand for consistent hand placement that translates to more confidence in every stroke.

All four TOUR SNSR models feature a wide paddle front, sculpted to promote lighter grip pressure and consistent hand placement. Additionally, they are each finished with a traction-textured design that provides heightened feel and moisture control. Each shape is available in two oversize options, 104cc and 140cc.

“Our new TOUR SNSR Series is arguably our most distinctive and innovative new putter grip line ever produced,” said Brandon Sowell, global director of sales and marketing. “We worked extensively with Tour players and amateurs for input during development and they clearly highlighted a need for enhanced feel and feedback with larger putter grips. Our R&D team took the challenge and produced a new soft rubber formulation that re-defines excellence for feedback and Tour performance.”

The TOUR SNSR Series will be available at retail in April and feature a street price of $24.99. For more information on the TOUR SNSR and the entire 2016 Golf Pride product offering, visit http://www.golfpride.com. 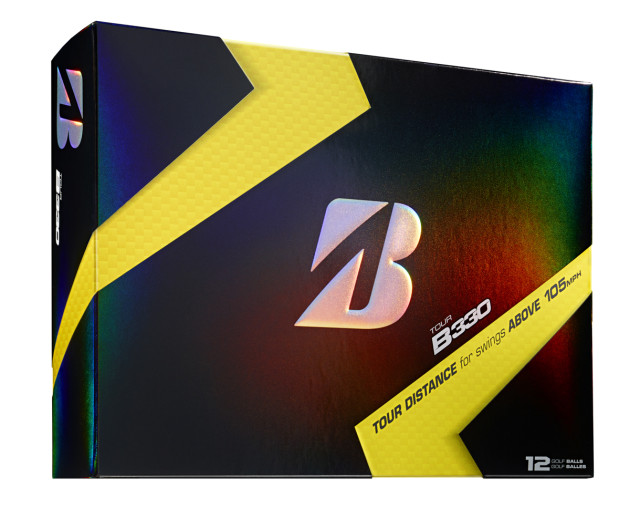 Covington, Ga. -Bridgestone Golf, the #1 Ball-Fitter in Golf, has used knowledge gained through extensive PGA TOUR testing and over 300,000 consumer in-person ball-fittings to perfect its Tour B330 family of balls. Bridgestone’s new 2016 Tour B330 and Tour B330S golf balls have been specifically engineered to produce longer drives and better spin around the green for players with swing speeds above 105 mph, using new proprietary TOUR Core and SlipRes Cover technologies.

Bridgestone’s 2016 B330 Family features Bridgestone’s new TOUR Core that is 6% larger and utilizes a steeper gradient in softness from the inner part of the core to the outer region, to generate faster ball speed and less spin off the driver than ever before. In fact, Bridgestone’s proprietary gradational compression technology in its core allows the company to accomplish in one layer what other ball makers accomplish in two or three layers, leading to a smoother energy transfer and more power.

Among the best players in the world, spin optimization is critical, so Bridgestone has designed the new Tour B330 and Tour B330S balls to have the largest dispersion of cover performance ever between the two models, offering something for the wide range of spin and feel preferences on Tour. Thanks to Bridgestone’s new SlipRes technology (an R&D marvel four years in the making) and a slightly softer cover formulation the 2016 Tour B330S offers increased greenside spin over previous versions, while the B330 offers feel for those players who prefer hit-and-sit short game performance.

The new proprietary SlipRes cover produces increased friction that keeps the ball more stable on the clubface, resulting in more spin on short shots. At the same time, SlipRes has the opposite effect off the tee, lowering driver spin due to that type of impact’s recoiling force, generating longer distance.

An added benefit to the new SlipRes Cover is enhanced durability. Due in large part to the cover’s innovative, soft self-repairing formulation, the new Tour B330 and Tour B330S golf balls are more resistant to stains and abrasions than ever before.

Both the 2016 Tour B330 and Tour B330S are in play on the PGA TOUR, including in the hands of Brandt Snedeker and Matt Kuchar, respectively. Snedeker debuted the new Tour B330 at the 2016 Hyundai Tournament of Champions and realized immediate benefits with a T3 finish.

“After testing the new ball I had no hesitancy in putting it in play right away in Hawaii. I usually do not put a new product in play so quickly, but the distance I was gaining with driver and the incredible greenside spin couldn’t be ignored,” said Snedeker. “Bridgestone hit a homerun. It’s longer off the tee, pure with my irons and around the greens it is just phenomenal!”

“The new B330S has serious wow-factor,” said Kuchar. “The combination of increased greenside spin and increased distance off the tee at the same time was something I never thought possible. I am genuinely excited about what this new ball can do for my game in 2016.”

Orlando, FL., For the first-time ever, golfers and instructors have access to a personal and portable system – for use both on the range and the course – that accurately analyzes the golf swing, while automatically tracking shots from tee to green and delivering analytics directly to a smart phone app and the cloud, in real-time. Kinetek Sports officially introduced the revolutionary ClubHub™ swing analysis and shot tracking system, a comprehensive golf performance system allowing instructors and coaches to better evaluate and interact with students, from anywhere at any time.

The patented ClubHub, which has an MSRP of $499 and is available at clubhubgolf.com, features 14 sensors, one for each club in the bag, which are seamlessly and easily attached to the butt-end of the club and then quickly paired with the smart phone app. Golfers simply make a swing and instantly see data on the app, including: club head speed, face angle, angle of attack, tempo and transition angle. Additionally, ClubHub’s shot tracking technology allows golfers to record rounds and scoring stats such as driving distances, fairways hit, greens in regulation and putting.

An authentic performance product for today’s modern golfer, ClubHub is the first and only sensor system to capture real-time swing analysis and shot tracking data for every shot.

Added Melican, “Through ClubHub’s lightweight and unobtrusive sensors, golfers can track shot distances and locations during their round, see a 3D video of their swing, record scoring stats from a round and instantly share all swing info and round data with their instructor. It’s truly a unique way to connect a golfer and a teacher and drive game improvement.”

By viewing the data, instructors can monitor on course swing characteristics and course management skills to help students develop a better all-around game. And, perhaps most important to the game of golf, ClubHub features a unique application that captures data while the golfer is playing a round of golf, and then stores it for post-round analysis. This ensures that a entire round of data can be captured and stored unobtrusively, while pace of play is never compromised.

“ClubHub allows golfers to see their game like never before, while enabling golf instructors to track their students’ performance from anywhere,” said Pat Steusloff, CEO, Kinetek Sports. “Now, a golfer can take what they’ve learned or practiced on the range, apply it on the course, and see the results first-hand.”

As an additional feature, ClubHub provides in-depth map views with GPS distances to any point on the hole of any golf course, adding an even greater on-course, game enhancement value to the product.