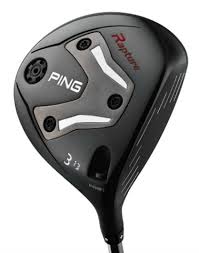 The Rapture 3-wood is now available for pre-ordering from PING-authorized golf shops.

“The weighting properties of titanium and tungsten provide our engineers a lot of opportunities to improve performance,” said John A. Solheim, PING Chairman & CEO. “The high-strength beta-titanium material allowed us to really focus on creating a hotter face that yields ball speeds and distance unlike any we’ve seen in fairway woods. The tungsten positions the weight extremely low so we can optimize the CG position. It has a taller face and deeper head profile, so golfers will have complete confidence with the Rapture. We think golfers will really appreciate this unique combination of technology to improve their performance. It’s extremely long off the tee. We’re excited to get it in golfers’ hands.”

A tall, extreme-variable-thickness face made of high-strength beta titanium (30% stronger than standard titanium) enlarges the hitting surface for increased forgiveness while accelerating ball speed to generate distance. Almost 25% of head mass is isolated in the tungsten sole plate, which positions the CG much lower in the Ti 8-1-1 head, further improving energy transfer for higher ball speed and less spin. The matte-black 219cc head has a deep profile for inspiring confidence. The standard 13 degrees of loft can easily be adjusted plus or minus ½ degree using PING’s Trajectory Tuning technology. The lightweight adjustable hosel has the same outer diameter and mass of PING’s traditional fixed hosels and provides the benefits of adjustability without sacrificing the performance that’s often lost in clubs with larger hosel designs.

PING’s proprietary TFC 949 graphite shaft promotes an increase in momentum and inertia for improved energy transfer, resulting in faster ball speeds and greater distance. Solheim said his company’s unique high-balance-point shafts have been key contributors to maximizing performance in its drivers and fairway woods. “In the TFC 949, for example, its high balance point enabled us to engineer a standard length of 43½ inches while increasing the mass of the head. With the same amount of effort, the golfer will be able to deliver a lot more power.” 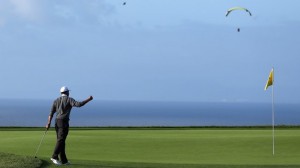 One of the most scenic stops on the PGA Tour — Torrey Pines in La Jolla, Calif. — plays host to this week’s Farmers Insurance Open.

Tiger Woods is the defending champion at Torrey, a place where the world’s No. 1 golfer has won an incredible eight times as a professional, including the 2008 U.S. Open. This marks Tiger’s first start of the 2014 season.

There’s so much to love about the South Course at Torrey Pines — the breathtaking views, the paragliders and especially the risk-reward, par-5 18th hole. That was the scene of Tiger’s dramatic 72nd-hole birdie in the final round of the U.S. Open, which forced an epic Monday playoff with Rocco Mediate.

Unlike the last couple of weeks on Tour, the Farmers Insurance Open isn’t the kind of tournament where you get lapped by the field for making pars.

With that, here are five players to watch:

5. Nick Watney Best finish in 2013: Second in the BMW Championship Reason to watch: The bottom line is that Watney is downright comfortable at Torrey Pines. He’s finished in the top-10 at Torrey Pines in four of the last five years, highlighted by an impressive win in 2009. Like a lot of players, this will mark Watney’s first start of the new calendar year and the first time he tees it up on the PGA Tour since early November. There might be a little rust, but surely he can brush that off at a place that really seems to suit his game.

4. Charles Howell III Best finish in 2013: Second in a playoff at Humana Challenge Reason to watch: There are many stops on the PGA Tour where one can say, “The only thing Charles Howell III hasn’t done there is win.” Torrey Pines is near the top of that list. Howell is such a solid player and it’s nearly impossible to believe the truth that is he’s only got two PGA Tour wins. Howell’s best finish at Torrey was sole second in 2007 and he’s sprinkled in a couple of top 10s since. Will he win this week? Who knows? Will he be contending? Probably. Howell — unlike many — has played lots of golf in this new season. He’s already got seven starts under his belt for the 2014 season and four of those have been top-8 or better.

3. Brandt Snedeker Best finish in 2013: Winner of AT&T Pebble Beach National Pro-Am and RBC Canadian Open Reason to watch: With a win and two runner-up finishes in his last four starts at Torrey Pines, Snedeker is a force in La Jolla. If the putter is behaving — and it typically always is for Sneds — he’s going to be in the mix. In three starts this new season, Snedeker has left something to be desired with finishes of T55, T11 and T58. Look for things to turn around this week.

2. Phil Mickelson Best finish in 2013: Winner of the Waste Management Phoenix Open and The Open Championship Reason to watch: It could be argued that no player on the PGA Tour has logged more rounds at Torrey Pines than Mickelson. It was his backyard growing up. He loves the place — though hasn’t been in love with some of the changes over the years. The last couple of years (at Torrey) haven’t been anything of note for Mickelson — a missed cut in 2012 and a tie for 51st in 2013. In 2011 though, Mickelson finished second. Over his career, Mickelson has won at Torrey Pines three times, but the most recent of those three was 13 years ago in 2001. Lefty is coming off a tie for second last week in Abu Dhabi. So, he’ll have plenty of confidence when he tees it up on Thursday.

1. Tiger Woods Best finish in 2013: Winner of the Farmers Insurance Open, World Golf Championships-Cadillac Championship, Arnold Palmer Invitational presented by MasterCard, The Players Championship and the World Golf Championships-Bridgestone Invitational. Reason to watch: Like I said in the intro, Tiger has won at Torrey eight times as a professional. What many players would consider a great career in terms of wins, Tiger has had just at one venue. Like so many times in the past, we’ve seen Tiger start out a great year at Torrey Pines. This shouldn’t be any different.

With the LPGA Tour season starting back up today at the Pure Silk Bahamas LPGA Classic, Volvik is pleased to announce their 2014 LPGA Tour staff.

“What a season we had on the LPGA Tour in 2013,” said Volvik USA President Don Shin. “It seemed like every week we had a player leading or near the lead on the LPGA Tour. We were able to spread the word on Volvik to hundreds of thousands of golfers watching our LPGA Tour players perform in 2013 and we feel we have made all the right moves to have similar, if not better, success in 2014.”

Three players finished on the Top 25 on the LPGA Tour money list in 2013 playing Volvik golf balls and all three players will be returning to the Volvik staff in 2014. Star players Chella Choi and Pornanong Phatlum endorsement deals carried over from previous multi-year deals. Phatlum had a productive off-season, winning the Dubai Ladies Masters on the Ladies European Tour December 7 and the Hitachi Ladies Open on the LAGT January 12 with a Pink Vista iS golf ball. Choi finished a career year in 2013 as the highest ranking Volvik player, finishing the year 17th with $739,441 earned.

The other Volvik staff player to finish in the Top 25 and defending champion of the Pure Silk Bahamas LPGA Classic, Ilhee Lee, was re-signed to a 2-year extension in the off-season. Number 45 from the 2013 LPGA Tour money list, Meena Lee, was also re-signed to the Volvik professional staff for 2014 and beyond. After a solid rookie year in 2013, Mi Hyang Lee, is also on a multi-year deal and is looking to have a break out year and 2014.

Australian Lindsey Wright will be playing her Orange Volvik golf ball in 2014 after earning $125,964 in 2013. American Victoria Elizabeth will be playing her second straight LPGA Tour season after qualifying for the tour in Q-school. She is the first player to use four different colored golf balls and earn a tour card in Q-School history.

American golfer Christine Song will be joining the Volvik LPGA Tour staff again after earning her LPGA Tour card on the 2013 Symetra Tour by finishing 4th in the Volvik Race for the Card. Song won twice on the Symetra Tour in 2013 using a Yellow Volvik golf ball. Former LPGA Major winner Birdie Kim will also be joining the LPGA again this year after earning status through Q-school.

A new player to the Volvik staff, Thidapa Sunawannapura, will be joining Team Volvik in 2014. Sunawannapura won the Hero Women’s Indian Open on the Ladies European Tour Nov. 30 by three shots at the Delhi Golf Club with a new prototype Volvik golf ball. Her victory is the first win for the new hybrid white/color golf ball that is launching Jan. 22 at the 2014 PGA Merchandise Show in Orlando, Fla.

In 2013, players using Volvik color golf balls earned one Victory, 13 Top 5 finishes, 22 Top 10 finishes and 48 total Top 25 finishes on the LPGA Tour. These prolific numbers mean that Volvik averaged a Top 5 finish in over half of the LPGA events played and averaged a Top 10 finish in 78% of the events played this season.  With 48 Top 25 finishes, Volvik averaged 1.7 Top 25 finishes per event played. Six different players using Vista iS golf balls held the lead of an LPGA or LET round 10 different times this season. Company officials estimate that Volvik has received over $2.5 million in television airtime exposure from their players performing on the tour telecasts.

Volvik had 195 total instances of professionals using their Vista golf balls in tournament play on the 2013 LPGA Tour (77 Orange, 71 Yellow, 43 Pink and 3 Green).

Volvik is the #1 Color Golf Ball On Tour, with over 335  of its color golf balls in play on the 2012 and 2013 LPGA Tour. Since 2012, players using Volvik’s ultra high-performance color golf balls earned over $4.8 million on the LPGA Tour, Web.com Tour and Symetra Tour with six victories and 55 Top 10 finishes.