PHOENIX  – PING has brought its premium clothing label, PING Apparel, under company ownership and management, a move designed to strengthen its position in the U.S. marketplace while forming a more cohesive brand identity between equipment and clothing. PING Apparel’s Spring/Summer collection for men is set to arrive in golf shops later this month, with women’s debuting in March. Products include polos, shorts and skorts, mid-layers, outerwear, belts and socks.

“As owners we can be more closely involved to ensure the highest quality as we broaden our product lines with new technologies, state-of-the-art fabrics, even manufacturing methods,” said Andy Solheim, PING Executive Vice President. “The move also allows us to be consistent in our messaging across categories, showing golfers how all PING products help them play better.” PING Apparel had been operating under a licensing agreement.

“Like our equipment, PING apparel is engineered to help golfers get the most from their game,” Solheim said. “Sensor technologies and a higher grade of fabrics create stretchable, breathable garments for all-weather performance so golfers have the freedom to focus on shooting lower scores, even when conditions aren’t ideal.”

Many of the products were designed in collaboration with PING Tour pros, including Louis Oosthuizen and Angel Cabrera, who represent PING Apparel. Players frequently offered feedback and ideas following on-course testing. “I’ve worked with PING my entire career and I have a lot of trust in anything that carries the PING logo,” Oosthuizen said. “I like the way PING clothing looks and fits, but more importantly it allows me a full range of motion while keeping me comfortable in any weather.” 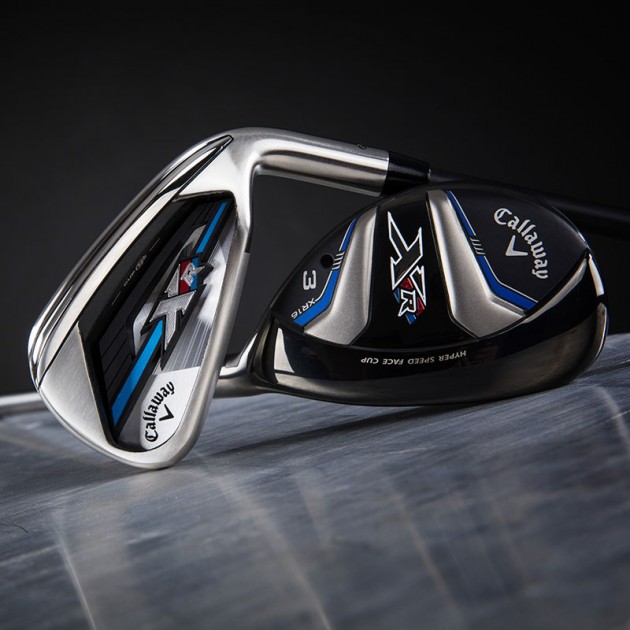 Easier To Hit, More Forgiving, and Long with our Industry-Leading Face Cup

For the XR OS Irons, we took our industry-leading Face Cup technology that’s helped make Callaway the #1 iron in golf, made the Face Cup even faster, and put it into a wider sole design that’s easier to hit and more forgiving. It’s easy to launch and easy to pick up distance with the Face Cup for players who want to add ball speed and hit the ball farther.

Long With Our Industry-leading Face Cup

We’ve taken our Cup 360 technology that’s redefined ball speed in the category, and helped us become the #1 iron in Golf…and we’ve made it even faster. And with the multi-piece construction we’ve implemented a new heat treatment in the face cup for even more ball speed, with a soft heat treatment on the body for better feel.

XR OS Irons are easy to launch with a Center of Gravity that’s lower and further back. It’s easy for you to get a ball flight that leads to more distance.

The soles are wider to give you more forgiveness, and it’s easier to get more distance out of every impact location. You’ll feel confident over the ball, and you have the technology to hit good shots more consistently.

To help golfers hit the ball farther, we’ve included the progressive lengths and lofts through the set for longer distance off each club.

The XR OS Hybrids are designed to perfectly complement the XR OS Irons, and they’ll give players an extreme amount of forgiveness and great ball flight trajectories. We’ve combined our industry-leading, category-defining Face Cup for high ball speeds and maximum distance, more versatility, and a larger head shape to get the most forgiveness and great launch with more draw bias. It’s the perfect hybrid for golfers who are looking to elevate their game.

Our Forged Hyper Speed Face Cup has redefined distance and ball speed in the hybrid category, and we put it in the XR OS. It’s built to give you more speed and forgiveness across the face so that you get the most distance out of each shot.

We used a larger head to create higher MOI for maximum forgiveness. It has a look that gives you confidence over the ball, and it’s built for great ball flight trajectories. We’ve also made it higher launching and draw biased so that it’s easier for you to turn the ball over.

They give you the versatility to hit good shots from all lies with our keeled utility sole. These hybrids are going to be a go-to club for you off the tee, the fairway or out the rough.

• The N.S. PRO Regio B graphite driver shaft is aimed at improving carry distance by virtue of improved initial velocity, decreased spin and optimized launch angle of trajectory. The Formula B shafts are 46 inches long and weigh between 52.5 to 78.5 grams. They come in four flexes – R2-R-S and X, and are ideal for players who use the N.S. PRO MODUS3 Tour 120 because of their similar shaft-bend profiles. The Formula B is a better shaft for players who release the club early on the downswing. The dominant color pattern of the Formula B is blue.

• The N.S. PRO Regio M graphite driver shaft is aimed at increasing carry distance through improved initial velocity, decreased spin and optimized launch angle of trajectory. The Formula M shafts are 46 inches in length and weigh between 52 and 80.5 grams with R2-R-S and X flex options. The Formula M is ideal for players who use N.S. PRO MODUS3 Tour 130 steel shafts in their irons due to similar shaft-bend profiles. The Regio M is the better shaft for players who release the club late on the downswing. The dominant color pattern of the Formula M shaft is red.

• The N.S. PRO Regio MB graphite driver shaft also is aimed at improving carry distance through improved initial velocity, decreased spin and optimized launch angle of trajectory. Formula MB shafts are 46 inches long, weigh between 53.5 and 81 grams and come in R2-R-S and X flex options. The Regio MB shafts are ideal for players who use N.S. PRO MODUS3 TOUR 105 and 125 shafts because of similar shaft-bend profiles. The Regio MB is better for mid club-release players.

“Although Nippon Shaft is best known for creating the first Tour-quality sub-100 gram steel shafts for irons, we always have been a comprehensive shaft manufacturer, and have designed and produced world-class graphite shafts for drivers for many years,” said Hiro Fukuda, sales and marketing for the company.

Nippon Shaft also will introduce the new N.S. PRO Zelos8, its latest steel shaft for irons, weighing in at between 84 and 87.5 grams. The N.S. PRO Zelos8 is designed with a low kick point and evenly distributed rigidity, which delivers effective flexibility from the tip of the shaft to butt. The Zelos8 is easy to handle and helps produce smooth swings along with lower spin and a ball-flight characterized by a high peak trajectory.

“The Zelos8 is a refinement on last year’s revolutionary Zelos7, weighing 10 grams more than the world’s lightest constant-weight steel shaft,” Fukuda said. “Both are aimed at golfers looking to combine the lightness, softer feel and flexing advantages of graphite with the performance and consistency of steel.”

Nippon Shaft will showcase its new products along with its full line of graphite and steel shafts at the upcoming PGA Merchandise Show, Jan. 27-29, at Booth 711 in the Orange County Convention Center. Show attendees may hit clubs equipped with Nippon Shaft products at Bay No. 8 at the indoor driving range at the Convention Center.

Nippon Shaft also will showcase its products at Tee No. 8 at the PGA Merchandise Show’s popular Outdoor Demo Day on Tuesday, Jan. 26 at the Orange County National Golf Center in Winter Park. Attendees may hit clubs outfitted with Nippon Shaft products on the driving range.

The popularity of Nippon Shaft on the world’s major golf tours continued to explode in 2015, with 106 players on the PGA TOUR and European Tour combined utilizing steel shafts built by the Japan-based golf shaft manufacturer.

That computes to an increase of over 50 percent compared to the prior year when 70 major Tour pros used Nippon Shaft.

And it’s more than double the 48 players who used Nippon Shaft products in 2013.

In addition, more than 70 players used Nippon Shaft N.S. PRO MODUS3 WEDGE shafts, which were designed exclusively for wedges, utilizing unique technologies that contribute to high levels of stability and feel in the short game. The WEDGE shafts were released to the public in March of 2015.