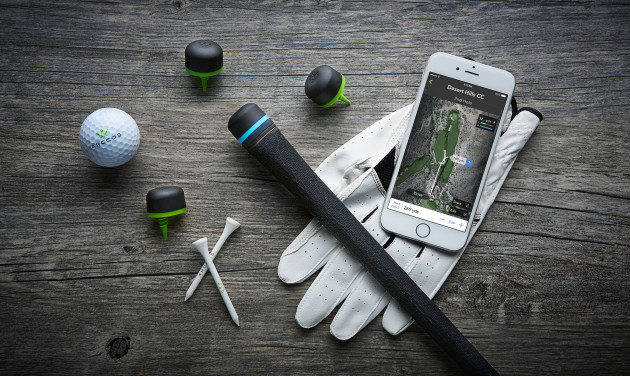 Providing golfers with an entirely new opportunity to battle their friends and take on the world, Arccos Driver is a single-sensor system that automatically detects each drive. It then uses sensors found on all major smart phones to record second shot position without the need for tagging or other annoying disruptions.

– Advanced GPS for 35,000+ courses worldwide
– Distance & Accuracy Stats for every drive and round
– Personalized Challenges based on performance history
– Live Leaderboards for daily, weekly, monthly and customized competitions
– Social Bragging via one-touch posting to Facebook, Twitter and Instagram
– Precise Shot Detection that distinguishes between real and practice shots

“We’ve created the first-ever handicap system for driving, meaning players of all skill levels can compete heads up in our new game, called Crowns,” says Arccos CEO Sal Syed. “By rewarding both distance and accuracy, Crowns introduces an entirely new element of fun to every round, while also promoting skill acquisition.”

On the first tee, Arccos Driver users are presented personal, skill-based challenges for fairways hit and “Bomb Drives” (tee shots longer than their average). Players then acquire points in the form of Arccos Yards to compete against their foursome, friends and others on leaderboards hosted in the app.

To start playing with the system the system, users simply attach the ultralight (less than 12g) sensor to the grip end of any driving club and pair it just once to a smartphone using the free Arccos Driver app for iOS or Android. The Arccos Driver sensor uses a standard watch battery (CR2032). This lasts up to 50 rounds, with charge level monitored via a battery indicator in the Arccos app.

The launch of Arccos Driver follows introduction of the flagship Arccos Golf system in October 2014. It has been widely heralded as one of the game’s most innovative and beneficial technologies. Endorsed by 2014 FedExCup Champion Billy Horschel Arccos Golf automatically delivers info on distances hit, club averages, driving accuracy, greens in regulation, sand saves, putts and more. Post-round, players and their instructors can gain valuable insights on overall performance via deep dives into statistics, past rounds, Tour Analytics and more.

Developed in conjunction with golf’s most renowned statistician, Peter Sanders, Tour Analytics draws from his work with PGA Tour star Zach Johnson and many others. It automatically breaks down a players’ handicap into five key components – driving, approach, chipping, sand game and putting – helping golfers:

– Gain insight into what every shot means
– Understand exactly how each part of their game contributes to scoring
– Explore comparative data in each of the five components from golfers with the same handicap
– Evaluate patterns across their entire golf history, supporting refinement of on-course tactics

Led by a team of Ivy League engineers, rocket scientists, PhD’s and designers, Arccos Golf is named after a function of advanced mathematics.

Overland Park, KS, April 4, 2016 – Bushnell Outdoor Products, makers of the No. 1 Laser Rangefinder on the PGA Tour, today announced a 2015 donation of $259,788 to the Folds of Honor Foundation. Since establishing a partnership in 2010, Bushnell has contributed more than $1.2 million, supporting the spouses and children of disabled or fallen soldiers.

“Bushnell has been one of our longest standing partners and we’re proud to be associated with a company that cares so deeply for our cause. Through Bushnell’s donations and marketing efforts surrounding the foundation, we’re able to make a significant difference in the lives of families affected by wounded or fallen soldiers,” said Major Dan Rooney, Folds of Honor Foundation president and founder.

Founded by Major Dan Rooney in 2007, the Folds of Honor Foundation provides educational scholarships to the spouses and children of service members disabled or killed during U.S. military service. Major Rooney, a former F-16 pilot who served three tours in Iraq, founded Folds of Honor Foundation to ensure that families of fallen and disabled service members are never left behind on the field of battle.

Bushnell, the number one choice of professional golfers, offers a full array of rangefinders, which continue to change and improve the way golfers assess distances, ultimately improving performance.

Nike Golf’s Spring/Summer 2016 apparel and footwear collection disrupts the status quo at one of the most highly anticipated sporting events of the year. Bold new polo designs featuring a blade or roll collar, paired with radical footwear, are juxtaposed against the backdrop of the historic course. Four Nike Golf athletes, including Rory McIlroy, 2011 winner Charl Schwartzel, Paul Casey and Brooks Koepka, will showcase the unexpected styles.