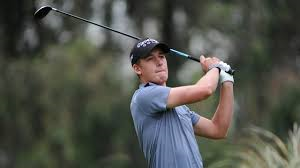 HUNTINGTON BEACH, CA – April 28, 2014 – Cleveland® Golf/Srixon® congratulates staffer Andrew Putnam for earning his first professional win at the Web.com WNB Classic held at Midland Country Club, in Midland, Texas. The 25-year-old second-year pro from Washington, shot an 8-under 64 in Saturday’s third round to open up a seven-stroke lead over his nearest competitor. Putnam was only able to complete 7 holes for an eight-stroke lead on Sunday before high winds forced the cancellation of the final round. Sustained winds of 28 mph with gusts up to 50 mph forced officials to call off the final round with the standings reverting back to 54 holes, where Putnam still held his nearly insurmountable lead.

“Seven shots was a big margin and I was playing well, but you never really know how it’s going to work out,” Putnam said. It’s a bummer that we couldn’t play it all the way out. I’m sure it would have been a different feeling walking up 18 with a big lead.”

Putnam earned $108,000 to climb from sixth to second on the money list with $248,273, more than enough to earn a spot on the 2015 PGA Tour. Putnam’s older brother, Michael, is on the PGA Tour this season after winning the Web.com Tour money title last year. Andrew and Michael Putnam are only the second set of brothers to win on the Web.com Tour.

Foster City, CA – Loudmouth Golf, the leader in bold and bright golf and lifestyle apparel, has released their brand new summer patterns for 2014. Loudmouth’s summer collection offers an array of fun prints that will have you stylin’ all summer long. The collection features five bold new designs:

• “Tango” – “Helicopter…Niner-Six-Niner-Tango-India-Tango inbound with air support for Bravo Company.”
• “Galaxy Girls” – It’s that time of year when Loudmouth unveils its ever-popular and sometimes controversial pin-up girl design which is out of this world! You should be able to identify these flying objects!
• “Dutch Treat” – Based on a famous Euro fashion design in the 1960s, Dutch Treat is a new, exciting direction for Loudmouth. It had a sneak preview in Sochi on the Norwegian Curling team in different colors and was the most popular design of the 9 pants they wore. Now available in its classic colors.
• “Miami Slice ” – Miami’s favorite detectives would have looked bitchin’ in these jetting across Biscayne Bay in a cigarette boat.
• “Betsy Ross” – A classic pant that any minuteman would be proud to start a fashion revolution with. And did you know Betsy Ross was born Elizabeth Griscom?

“The summer collection has some surprises in it. Some golf apparel companies start off with a bang then gravitate toward the bland middle,” says Loudmouth Founder and Designer Woody! “But we’ve stayed faithful to our loud roots. Those looking to make a statement with their apparel this summer won’t be disappointed!”

The new Summer 2014 collection is available for both men and women and includes pants, shorts, skorts and mini-shorts. In addition to our stocked sizes, Loudmouth offers Made-to-Order (MTO) clothes, which lets customers customize the waist size and length of their garment to provide the ultimate fit. Loudmouth pants, shorts, skorts and mini-shorts are all made in 97% cotton and 3% spandex. 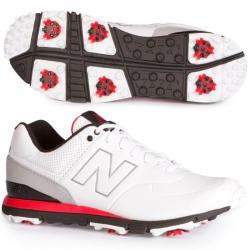 Boston, Mass., April 29, 2014 – Inspired by the classic 574 lifestyle running shoe, global athletic leader New Balance announces the introduction of the men’s 574 golf shoe. Built on the New Balance 574 last, this features a waterproof microfiber leather upper and a REVLite® 10mm drop* midsole for lightweight cushioning and premium responsiveness. All New Balance cleated golf shoes feature the CHAMP® ONE-Lok® fastening system with ZARMA® cleats**. Golfers will enjoy New Balance comfort, durability and style in the 574 along with outstanding traction and stability for their game.

“The classic 574 is one of the top selling shoes in our lifestyle running line,” said Bruce Schilling, General Manager of Golf and Tennis, New Balance. “The golf shoe has tremendous appeal to the younger golfer who is already wearing our classic suede 574. This golfer can expect the same style, comfort and fit attributes plus performance technologies designed to enhance their game. The feedback from our retailers on this shoe has been outstanding.”