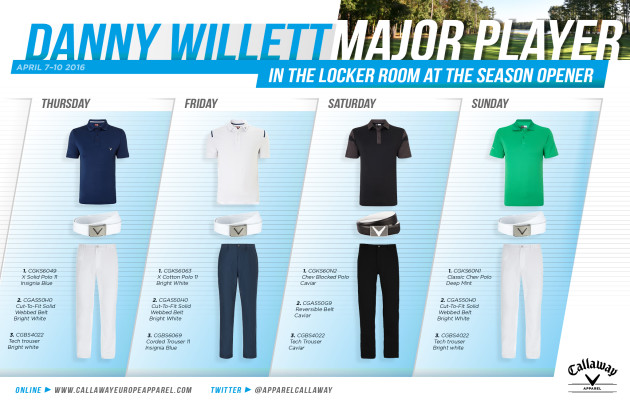 Callaway Apparel Ambassador Danny Willett won his first major with a bogey-free round on the final day of the 80th Masters Tournament to finish at five under par with a three shot lead.

All of Willet’s attire for the 2016 Masters Tournament included three fabric technologies within Callaway’s unique Opti-Series. Opti-Dri™ transfers moisture away from the body to aid in evaporation. Opti-Shield™ provides a layer of protection from the sun’s harmful UV rays. Opti-Stretch™ provides an optimum range of motion using interwoven layers of Spandex within the fabric.

Willett is one of the golf’s rising stars, having climbed from outside the top 100 to inside the top 10 in less than two years. Few would have predicted a first major win in only his second appearance on the unforgiving Augusta course, especially with his participation at the Masters being in doubt just weeks before.

Danny’s wife, Nicole, was due to give birth to their first child on the final day of the Masters Tournament. However, the early arrival of baby Zachariah James meant Willett, who said he would have stayed at home if his son had not been born, was able to play.

“On this rare occasion I’m nearly speechless,” added Willett, who moves up to ninth in the world rankings. “It’s been a fantastic week on and off the golf course.”

“It’s been one of those crazy weeks where things seem to go your way. The 80th Masters is always going to be special and dear to my heart.” 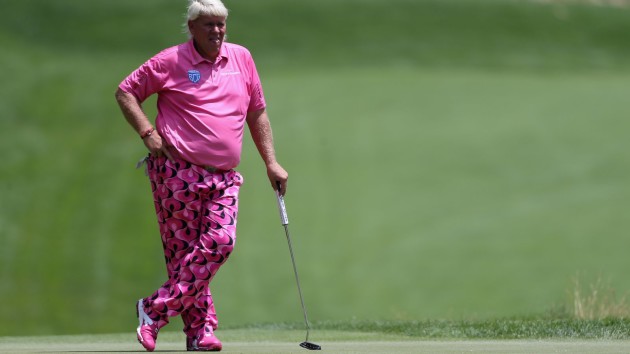 Loudmouth Golf will be on-site to cheer on John Daly at his inaugural event on the PGA Tour Champions.

Foster City, CA (April 12, 2016) – Loudmouth Golf, the worldwide leader in bold and bright golf and sports fan apparel, has signed on to sponsor its first professional tournament, the Insperity Invitational presented by UnitedHealthcare, at The Woodlands Country Club Tournament Course in The Woodlands, Texas on May 2-8, 2016. The event will mark two-time major winner, and Loudmouth sponsored golfer, John Daly’s debut event on the PGA TOUR Champions.

Loudmouth Golf and the Insperity Invitational will be celebrating the debut with a number of initiatives. First, they will celebrate “Loudmouth Day” on Friday, May 6th where attendees will be encouraged to wear their Loudmouth Golf apparel along with staff and volunteers at the event.

Additionally, the first 1,000 attendees through the main gate on Friday, May 6th will receive a special John Daly bobblehead wearing new spring 2016 Loudmouth pattern, “Atom Smasher” courtesy of the Insperity Invitational presented by UnitedHealthcare and Hewlett Packard Enterprise. (Offer good while supply lasts). Loudmouth apparel will also be available for purchase at the Insperity Fan Experience.

“We are John Daly’s biggest fans and are thrilled to cheer him on in his inaugural PGA TOUR Champions event,” says Loudmouth Golf President and CEO, Dennis Green. “John has been the face of Loudmouth Golf for many years and has done an excellent job at showcasing our clothing to the golf world. We are proud to sponsor him and look forward to more exciting things to come in 2016.”

Loudmouth Golf has been an apparel sponsor for Daly since 2009, and has been outfitting the star in his famously colorful and notoriously wild patterned golf pants ever since. 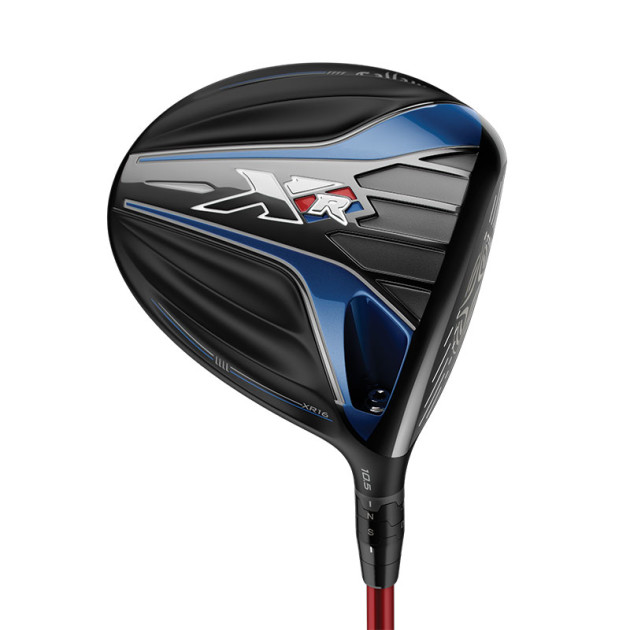 Willett wins impressively with an XR16 driver and a bag full of Callaway clubs, a Callaway ball and an Odyssey putter

CARLSBAD, Calif, April 11, 2016 – Callaway Golf has announced that Staff Professional Danny Willett used its new XR16 Driver in his major championship victory in Augusta, Georgia this weekend. Carding a final round 67 to win by three strokes, Sunday capped an incredible stretch for Willett after becoming a father the week before the event. In addition, Willett had a bag full of Callaway golf clubs, a Callaway golf ball and an Odyssey #1W Versa Putter.

Willett averaged 305 yards per drive Sunday with a Callaway XR16 Driver on his way to winning the green jacket. For the XR16 Driver, Callaway worked with a team of experts at Boeing to redefine what’s possible with aerodynamics and ball speed. Callaway engineered its most forgiving shape ever and Boeing made it fast with a re-engineered Speed Step Crown.

Willett first put his XR16 Driver in the bag in February, and in his 2nd start with it he won in Dubai. In a recent Callaway podcast, Danny said of his driver, “I did a lot of testing with the driver over the winter and I didn’t hit too many balls with it before it went straight in the bag. The new XR technology…it did exactly what (Callaway Tour Reps) said it was going to do. It gave me a little more ball speed and helped me control my ball flight. So it was a win-win.”