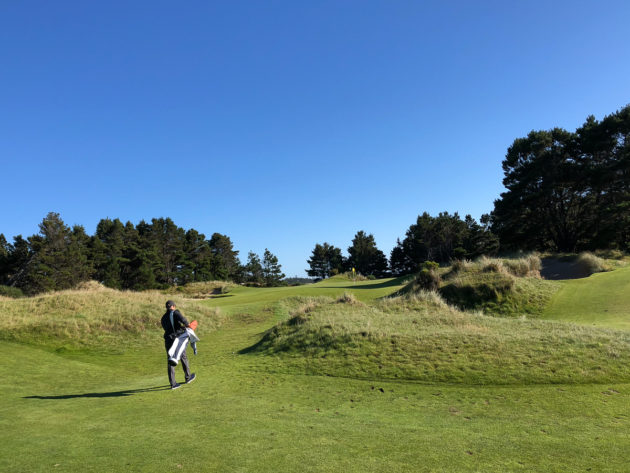 So far, I’ve written 5,904 words of course reviews about Bandon Dunes, and I’m not sure I’ve begun to get to why its such a special place.  To say that the golf is world class is an understatement, but that’s not the whole picture.

Perhaps numbers can do better.

Bandon Dunes by the Numbers

Orders of Grandma’s Meatloaf at McKees: 4 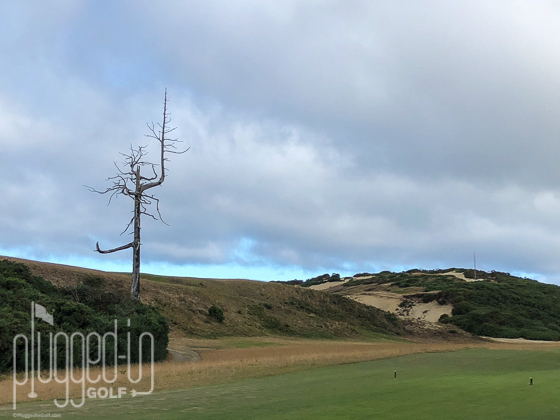 With apologies to the math lovers, numbers aren’t the answer either.

I was struggling to explain Bandon’s appeal until I saw one of Shoe’s daily posts and said to myself, “What other course has a Director of Happiness?”

The people I met at Bandon Dunes are what make the place special.  They take world class golf and elevate it to something much more.  I may not be able to put that something into words, but I can tell you about the people who create it. 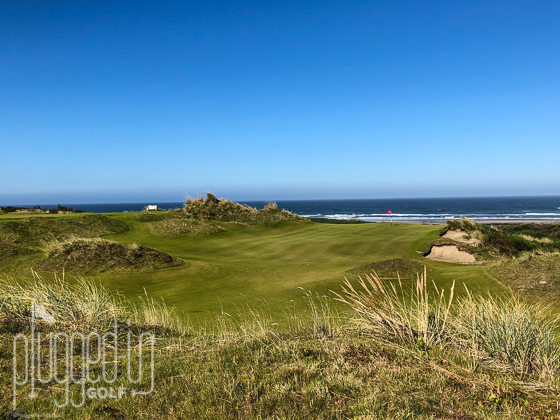 Michael Chupka, Whom I Can Never Repay

Michael is probably going to be embarrassed about being brought to center stage, but he set the tone for this whole trip.  A trip that would not have happened without him.

From the first email exchange to greeting us on arrival to checking on us throughout the trip, Michael could not have been a better host.  He’s an exemplar for the kind of hospitality that you get at Bandon Dunes – always available, genuinely happy to help, but never over the top.

Also, and I say this because he would never say it for himself, Michael is the only non-caddie to ever win Bandon’s employee tournament.  Translation: he’s got a TON of game. 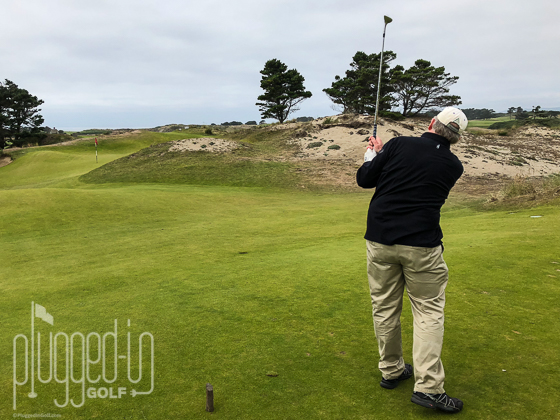 If someone wrote Grant into a novel, readers would complain that the character was unbelievable.  “Who has so many hole-in-ones that they won’t even say the number?  That’s preposterous.”  After having played Bandon Preserve with him, I have no doubt of the veracity of his claim.

As good as Grant is on the golf course, he’s a better story teller.  How good?  We had breakfast together before my group played Old MacDonald.  This was the round I was looking forward to more than any other, but I had to seriously weigh playing golf against continuing to listen to Grant.  Thankfully he had a full day of teaching, so I didn’t have to make the call.

If you are headed to Bandon, book a lesson with Grant if only so you can listen to him talk.  Ask him about the major league pitcher playing Carnoustie.

You can get a sample of Grant’s humor and wisdom HERE. 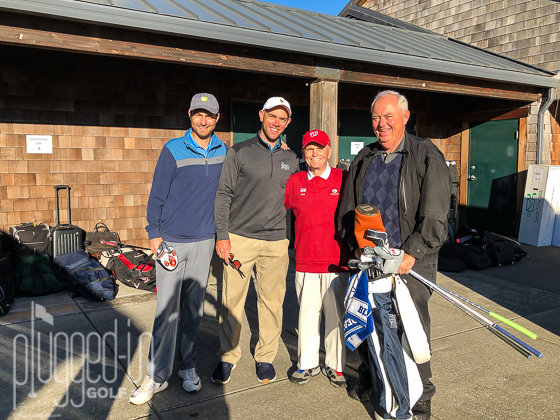 First, let’s marvel at the title.  I’ve seen some good ones, but I don’t think anything tops Director of Happiness.

Second, think about what it means that a place has a Director of Happiness.  They’re so committed to everyone having a good time, that they employ someone to stand out front and give off good vibes.

Finally, how amazing is it that, at a world-class golf course, people walk up thinking, “I’ve got to get a picture with Shoe”?  I don’t think there is a better illustration of how warm and inviting he is.  If I were building a golf resort, I’d do everything I could to hire him away from Bandon.  I doubt he’d leave, but I’d try. 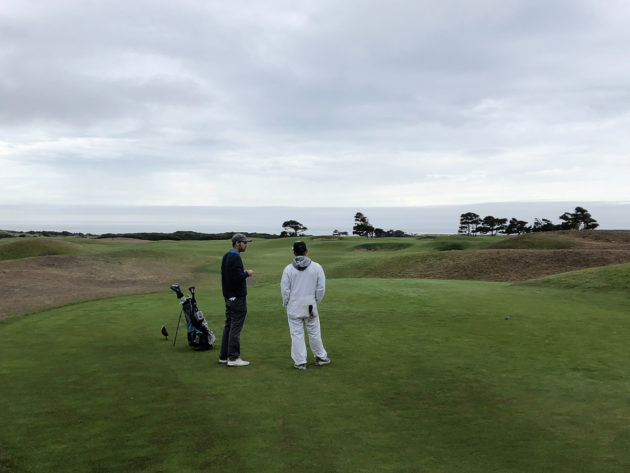 It may be a bit cliche, but it’s true: our Bandon experience would not have been the same without our caddie.  Dane has been at Bandon Dunes for 13 years, but his knowledge of the four courses would have you believe he shaped each one himself.  By hand.  The amount of shots – and more importantly, frustration – that Dane saved our group is immeasurable.  And after about two holes, our trust in him was complete.  If Dane told us to aim 180 degrees from the hole, we did it.

As much as Dane helped us with our game, he was equally helpful in boosting our enjoyment.  He had endless stories on a wide range of topics.  His demeanor kept everyone in a good mood.  He helped us move past bad shots and gave the most meaningful praise to good ones. 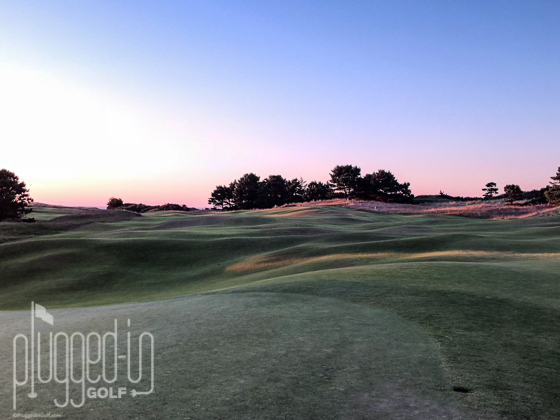 If I thought anyone would read it, I would give a section to every single starter, ranger, van driver, and member of the waitstaff.  Melanie at the Practice Center giving everyone high fives and welcoming them to “Man Camp” put a huge smile on my face.  The starter at Pacific Dunes told us about his passion for building hickory shafted golf clubs.  A waitress at Pacific Grill recognized my time-related stress and rushed out our breakfast order.  A shuttle driver shared the story behind her dog’s name.

It’s no exaggeration to say that everyone we encountered treated us like a friend.  They wanted to help us, learn about us, share their knowledge, and generally make sure our stay was great. 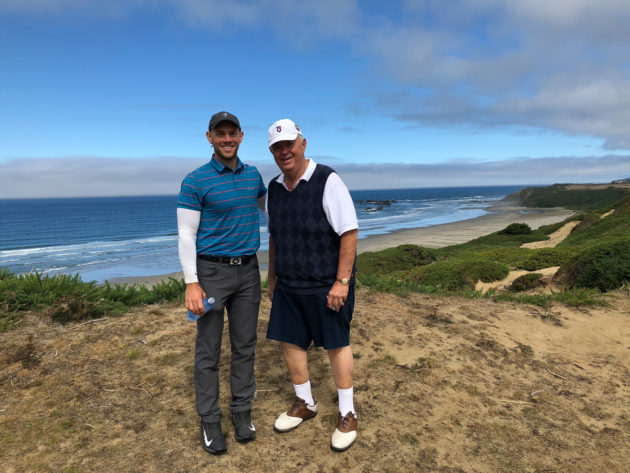 In the run up to this trip, an acquaintance described Bandon Dunes as, “just a great hang, man.”  It’s as good a description as I’ve heard.  It would be completely fair to go over-the-top with adjective-laced praise – “world-class golf, A1 service, first-tier lodging…” – but it would miss the larger truth.  Bandon Dunes is all those things, but what makes it special is the vibe.  It’s a place you can go to be away from everything else in the world, spend time with your friends, and share unforgettable experiences.  That’s why I’ll be headed back every chance I get.