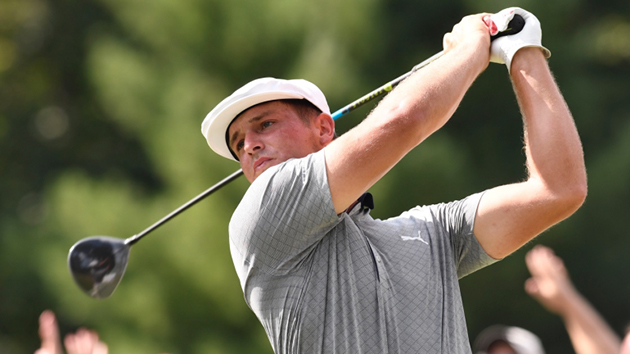 COBRA PUMA GOLF Pro DeChambeau with Another Epic Win at the Second Playoff Event of the Year; with COBRA Golf’s KING F8+ Driver & Forged ONE Length Irons in the Bag

CARLSBAD, CA – COBRA PUMA GOLF golfer Bryson DeChambeau with back-to-back, dominating FedExCup Playoff victories, capturing his fourth PGA Tour win at this weeks’ Dell Technologies Championship at TPC Boston. DeChambeau shot a stunning 8-under-par 63 on Sunday, ending the third round with a kick-in eagle at 18, followed by a fourth round 67, to win the tournament and retain his Number 1 position in the FedExCup Rankings.

DeChambeau won with full bag of COBRA Golf equipment including the KING F8+ driver, which he put in the bag for the first time before his win last week, and KING Forged ONE Length irons, and dressed head to toe in apparel, accessories and footwear from PUMA Golf including the celebrated PWRADAPT Leather golf shoes.

In 2016, DeChambeau signed with COBRA PUMA GOLF and worked with Cobra’s R&D team to launch its first sets of ONE-length irons, including the new KING F8 ONE Length and the KING Forged ONE irons he currently has in the bag.  DeChambeau’s KING F8+ driver features Cobra’s first CNC Precision Milled forged driver face. The groundbreaking, fully CNC machined driver face paired with revolutionary 360o Aero TechnologyTM and equipped with COBRA CONNECT™ Powered by Arccos, makes the F8+ the fastest, most precise and smartest drivers to date.

Details of the COBRA clubs in DeChambeau’s bag this week:

DeChambeau’s PUMA Golf apparel, accessories and footwear are from the brands 2018 Autumn Winter Collection showcasing fresh style combined with cutting-edge technical elements, that are designed to enhance on-course performance and provide looks that turn heads whether golfers are in bunkers or at the bar.

Relying on Bridgestone Golf’s TOUR B X ball, the 24-year-old phenom joined Vijay Singh as the only other player to win the first two legs of the FedEx Cup Playoffs since its 2007 inception, and is the favorite to earn the $10 million first-place prize. Showing excellent command in all areas of his game, DeChambeau ranked among the top 10 in driving distance and accuracy, and greens-in-regulation.  The win moved him to No.7 in the Official World Golf Rankings and all but secured him a Captain’s Pick for the 2018 U.S. Ryder Cup team.

DeChambeau shot a blistering third-round 63 (his second consecutive Saturday with that score). It was his first tournament pairing with childhood idol and fellow Bridgestone staffer Tiger Woods, although the two are frequent practice-round partners. They reportedly seek each other’s tips with DeChambeau offering mathematical theory on swing plane and ball flight. The two may be paired together in the Ryder Cup later this month.

DeChambeau switched to the TOUR B X in late 2017 after extensive experimentation and its impact on his driving, iron play, short game and putting.  He also wears Bridgestone’s new TOUR B FIT Glove featuring high-end Cabretta leather with FIT technology to ensure a soft feel, consistent grip and excellent durability.

The TOUR B Series golf balls represent Bridgestone’s most technologically advanced models to date.  During development, company engineers used data from more than three million in-person and online ball fittings, combined with insights from leading third-party industry sources, to identify needs of specific player types. They then drew on more than 800 golf ball patents to determine which proprietary technologies would most benefit each golfer persona identified. 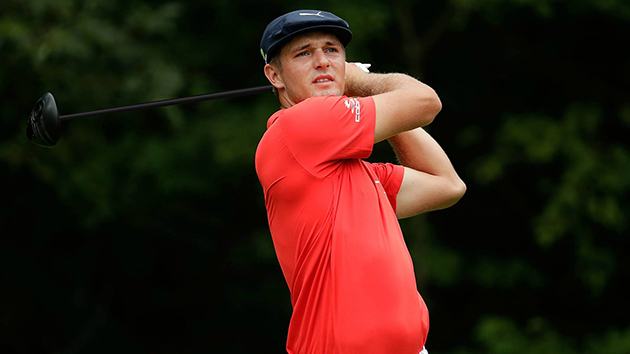 DeChambeau Collaborates on Signature Line of Custom Shafts, Including Putter Shaft Used in Victory at The Northern Trust

LOS ANGELES, CA – LA Golf Shafts, founded by LA Golf Partners, announced their first player partnership with Tour Pro Bryson DeChambeau to develop a line of signature golf shafts for the rising Tour star. Utilizing LAGolf Shafts product in his putter this weekend, DeChambeau won The Northern Trust with a blistering -18 giving him a four-shot victory at the first leg of the FedEx Cup Playoffs and vaulting him to the top of the standings.

LA Golf Shafts was established to create a golf equipment company unlike any other in golf, in which the owners group includes professional athletes on the world’s tours. LA GolfShafts is committed to producing authentic tour level products, designed and made in the USA with American sourced materials. Through strategic partnerships with touring professionals like DeChambeau, the players have an equity stake in the company and have direct involvement in their product development rather than the added frustration of picking product through trial and error. The company’s mission is to bring the same signature series products to golfers at every level.

“Bryson’s analytical approach to the game, emphasis on data driven improvements in his equipment, and his ability to communicate meaningful input into designs make him an ideal partner for LA Golf Shafts,” said Reed Dickens, founder of LA Golf Partners. “I can’t think of a more appropriate strategic partner for our mission to bring the technically advanced shafts used by the pros directly to golfers.”

DeChambeau and LA Golf Shaft’s John Oldenburg, former lead shaft designer at Aldila, developed a performance-driven and technologically advanced putter shaft, which was put in his bag for the first time this past weekend and utilized in victory at The Northern Trust. They have plans to develop custom shafts for additional clubs in the three-time Tour winner’s bag in the months to come.

“I love the science behind the game, so the concept of actively participating in the development of my own shafts is very appealing,” said DeChambeau. “I’m excited to partner with a design innovator such as John Oldenburg, to not only improve my game, but bring those same solutions to recreational golfers everywhere.”

With over 20 years of experience in designing shafts for golf’s best players, including 25 Major Champions and hundreds of winners worldwide, Oldenburg had taken a break from shaftdesign prior to joining LA Golf Shafts. It was LA Golf Shafts unique business model, and the chance to work collaboratively with top tour professionals, that motivated the innovative shaft designer’s return.

“It’s extremely liberating to take the shackles off and be in a situation with significantly more design freedom than I have ever had in terms of profiles and cost constraints,” said Oldenburg. “The opportunity to develop signature lines directly with the players and provide every golfer the access to those shafts and creating advanced designs in the main line is incredibly motivating for me.”

The partnership with DeChambeau is the first in LA GolfShafts ongoing effort to forge collaborative partnerships with a wide variety of Tour professionals. LA Golf Shafts will be launching new product lines this year, while also continuing to produce the OZIK line, currently used by many top-ranked players on the tour.