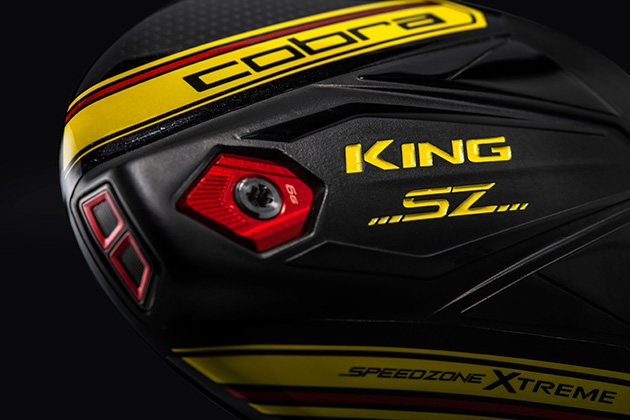 COBRA Invites Golfers To Enter The SPEEDZONE With Its Fastest, Most Technologically Advanced Driver Family Ever

CARLSBAD CA – Cobra Golf®, a leader in golf club innovation, today introduced its new SPEEDZONE™ Drivers – the company’s fastest and most powerful drivers to date. Taking inspiration from design attributes of the fastest cars in the world, COBRA optimized six unique zones of performance to deliver unrivaled speed and distance in two new drivers, the KING SPEEDZONE and the KING SPEEDZONE XTREME.  Like a racecar, every component from the internal chassis design to the exterior shaping was engineered to maximize power output.  Below is a rundown of the six zones of performance COBRA delivers in its 2020 SPEEDZONE Driver line.

1. POWER ZONE – CNC Infinity Milled Face – the face is the engine of the driver and is crucial for generating speed.  Using the only CNC Milled Face in a driver, COBRA has expanded the milled area of the face by 95% enabling them to control face & leading-edge thickness. Face and perimeter curvature can be up to 5 times more precise than traditional face polishing. In addition, every face is 100% inspected to ensure a larger SPEEDZONE across the face for maximum ball speed.

3. LIGHT ZONE – The new SPEEDZONE chassis allows for more carbon fiber than ever before.  A 360 Carbon Wrap Crown design makes up 50% of the driver body, providing ample stiffness and support to the chassis while saving 25 grams of discretionary weight. That weight has been repositioned low and back and around the perimeter where it is needed most.

4. LOW CG ZONE – Low CG is essential for driver performance, delivering maximum ball speed, higher launch & low spin. In the KING SPEEDZONE driver, COBRA continues to deliver a low CG for optimal performance, similar to the 2019 SPEEDBACK driver. In the SPEEDZONE driver, 69 grams of mass (vs. 40 in SPEEDBACK) has been strategically positioned low in the driver for optimal launch conditions.

5. AERO ZONE – combining aerodynamics with a low center of gravity continues to be a strength that COBRA delivers with its drivers. The new SPEEDZONE shaping harnesses airflow for maximum drag reduction and increased clubhead speed.

6. STABILITY ZONE – High speed stability is both important in racing and in driver performance. SPEEDZONE’s High MOI Design positions weight away from the center of the head to maximize stability on off-center hits for longer, straighter drives.

Appealing to a wide range of golfing ability levels, COBRA offers two distinct driver models in the SPEEDZONE equipment family.  The KING SPEEDZONE Driver offers a traditional shape profile with front to back CG adjustability allowing better players to work the ball with ease and fine tune launch and low spin without sacrificing forgiveness. The KING SPEEDZONE XTREME Driver ($449) is perfect for golfers who are looking for a consistent, straight trajectory with maximum forgiveness on off-center hits. As COBRA’s more forgiving option XTREME features a slightly larger shape profile with more perimeter weighting and a 17-gram tungsten weight that sits behind the rear exhaust pipe design to achieve the company’s highest measured MOI to date. 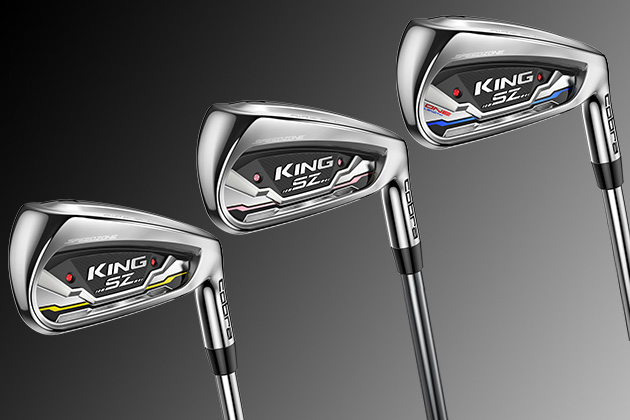 Cobra Golf® today introduced its new KING SPEEDZONE™ Irons – delivering ultra-low CG and increased ball speed thanks to the brands first ever carbon fiber topline. To deliver the fastest, best performing irons, COBRA’s engineers took inspiration from design attributes of the fastest cars in the world, focusing its energies on five unique zones of performance to deliver two new sets of irons that provide the optimum blend of distance, consistency and forgiveness.  Below is an explanation of how COBRA has optimized these five zones of iron design in the SPEEDZONE Variable and ONE Length irons.

1. LIGHT ZONE – For the first time, COBRA utilizes two strips of Carbon Fiber to replace steel both on the topline and underneath the topline creating a new I-beam type of construction allowing for saved weight and structural soundness. Carbon fiber is 40% lighter than steel and saves 3 grams of discretionary weight to be repositioned low to increase ball speed and launch in the 4-7iron.

2. STABILITY ZONE – COBRA’s engineers focused on high speed stability through the use of SPEEDBACK shaping which creates a wider body design around the perimeter of the club that delivers increased MOI and aids in lower CG. The result is an iron that is both forgiving and accurate.

3. POWER ZONE – Speed and distance continue to be the number one performance attribute desired by golfers. COBRA’s patented PWRSHELL Technology continues to offer increased speed and higher launch even on stronger lofted irons. The new forged PWRSHELL face in the SPEEDZONE iron features an updated E9 face structure that helps to lower the CG and create more return through a deeper undercut speed channel.

4. FEEL ZONE – While most golfers are looking for more distance and forgiveness, feel is still important. COBRA engineers focused on optimizing feel through the creation of a co-molded medallion system that damps vibrations quickly for exceptional sound and feel even on off-center strikes.

5. SPIN ZONE – Consistency of performance through trajectory and spin is optimized by the use of progressive spin technology that is 100% CNC milled throughout the set. V-grooves are utilized from the 4-6 iron to reduce spin and u-grooves on the 7-PW optimize spin and wedge-based grooves on the GW and SW to produce maximum spin for shots around the green.

COBRA Golf offers two distinct iron models in the SPEEDZONE equipment family.  In addition to the aforementioned zones of performance, the KING SPEEDZONE Variable Length Irons feature a progressive construction design – delivering progressive head shapes, grooves and hosel lengths that optimize launch and spin in the long irons, mid irons, and wedges.  The KING SPEEDZONE ONE Length Irons offer all the magic of SPEEDZONE technology in a set design that promotes one repeatable setup and swing – for more consistency and accuracy.  COBRA achieves this simplified approach by offering matching lengths (37.50”), head weights and swing weights in every iron.  In addition, the use of fine-tuned lie angles and progressive shaft weighting optimizes high launch and forgiveness in the long irons, and lower launch with more control in the scoring irons and wedges.

The 2020 KING SPEEDZONE Irons (along with the full KING SPEEDZONE family of products including irons, fairways and hybrids) will continue to employ COBRA CONNECT™ Powered by Arccos, the award-winning connected golf system that helps players of all skill levels make smarter, data-driven decisions. Electronically embedded sensors in the grip automatically record the distance and accuracy of every shot so golfers can track their improvements round-to-round. 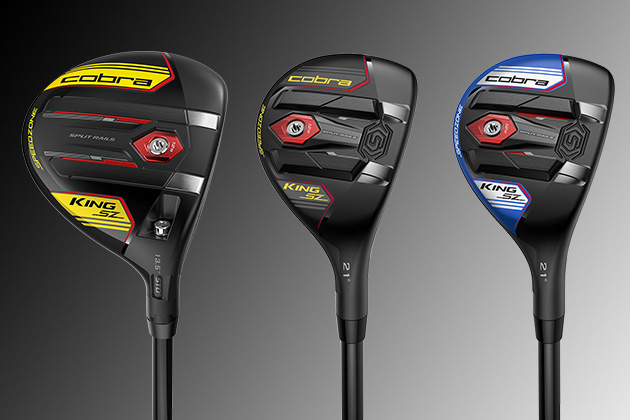 For 2020, COBRA is offering golfers the choice of three new fairway woods designed to suit a wide variety of golfers.  The first, the KING SPEEDZONE Fairway, is a more traditional model, designed with back weighting and a slightly shallower face for easy launch, higher trajectories and maximum forgiveness that yields increased distance. The second, the KING SPEEDZONE Tour Fairway, features a compact shape, with forward CG weighting, designed for better players that desire low spin, a more piercing trajectory and workability. The third fairway offering is the SPEEDZONE Big Tour Fairway which features the largest profile of the three, stronger loft, forward CG weighting, and near zero CGna, that produces the optimal combination of fast ball speed, high launch and low spin for extreme distance. All three fairway options feature COBRA CONNECT Powered by Arccos which allows golfers to track the accuracy and distance of every shot using the Arccos Caddie app on their smart device.

Throughout the three KING SPEEDZONE fairway offerings, COBRA engineers focused on optimizing four key “zones” in order to deliver more distance, forgiveness and accuracy than ever before.

ZONE 1 – THE POWER ZONE – the only forged CNC Milled Face in a fairway wood, created using industry-leading face manufacturing technology, allows for a thinner and hotter face design that is up to five times more precise than traditional hand polishing. This allows COBRA’s R&D team to repeatedly, and consistently, expand the zone for maximum ball speed.

ZONE 2 – THE FLEX ZONE – The new split rail structure divides the rail system into a front and rear portion. The front rails, silver in color, have been hollowed out to create thinner walls that flex with impact while still providing Baffler Rail technology to prevent the leading edge of the fairway from digging. The result is more flection for ball speed and higher launch, and a leading edge that glides through the turf delivering more club head speed through impact.

ZONE 3 – THE STABILITY ZONE – Dual Baffler Rails provide excellent stability and speed through the turf, allowing the club to glide effortlessly out of any lie and deliver more club and ball speed at impact.

ZONE 4 – THE LIGHT ZONE – An ultralight carbon fiber crown saves 10 grams of discretionary weight that is strategically positioned to lower the CG for higher launch with increased forgiveness.

Rounding out the high-performance design, MyFly with SmartRail™ technology affords golfers their choice of five (5) loft settings and three (3) draw settings to help manage trajectory and customize launch conditions while Smart Rail™ keeps the face square regardless of the loft setting.