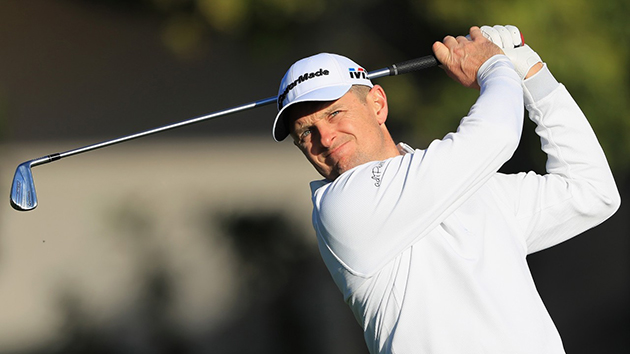 Equipped with full 14-club bag of TaylorMade metalwoods, irons, wedges, putter and TP5 Golf Ball, Rose captures his second PGA TOUR title of the season and 9th of his career.

Rose plays a 9.0° M3 440 driver with one weight back and toward the heel and the second just forward of neutral. Equipped with a Mitsubishi Tensei CK 60TX, Justin averaged 305.9 yards off the tee for the tournament.

Rose’s victory is his second PGA TOUR title this season and the 9th of his career (20th worldwide).

Earlier this season, Rose joined fellow TaylorMade staffers Dustin Johnson & Rory McIlroy in making the switch into the P730 irons. As he has for much of his career, Rose has them equipped with KBS Tour C-Taper 125 S+ shafts.

Rose has praised the performance of the TP5 golf ball since he first put it into play at Riviera last year and has played it ever since. It’s the 7th win on the PGA TOUR this season for TP5(x), with Rose adding his second win along with Day, Johnson, Rahm and McIlroy.

Rose recently made a switch into the TP Red Ardmore 2 putter, which he feels best suits his eye on the greens. He recorded 2.697 strokes gained: putting for the week. Including Rose, three of the top 5 finishers played TaylorMade putters.

Rose’s wedge setup remains largely unchanged; he plays the Milled Grind in 48°, 52° & 56° lofts, as well as a 60° Hi-Toe, which has been TaylorMade’s most sought after wedge on Tour.

CARLSBAD, CA – The colors red, white and blue are getting the ultimate treatment. Today, adidas unveiled a special line that features USA-inspired apparel and accessories to provide golfers with some new ways to show off their patriotic spirit. The new line – the USA GOLF Collection – pairs adidas’ top products built for the course with the colorways that everyone is looking for this time of year.

The collection of 10 articles is highlighted by four distinct styles of the Ultimate365 Polo, which was introduced at the beginning of this year, providing golfers with everything they need (stretch, breathability, drape, UPF50+ sun protection, balanced weight and consistency of fit), and nothing they don’t. A pullover and pair of Ultimate365 shorts compliment the polos for wear-anytime use. The collection also adds two hats and two belts to bring the entire ensemble together.

“We really enjoy designing pieces like this because we know how excited people get to wear them,” said Dylan Moore, creative director for adidas Golf. “It’s a perfect way to blend style and technology, and it’s no secret that once Memorial Day comes around, golfers are looking for those patriotic pieces to make a statement on the course.”

It was announced in February that adidas was renamed as the Official Uniform Provider of USA GOLF and this new collection is just the start of that design process.

“It’s definitely exciting to see what the team at adidas is already working on as we progress towards Tokyo,” said Andy Levinson, executive director, USA GOLF. “This collection gives fans a small glimpse of what’s ahead and provides them with some great options to proudly wear the red, white and blue on or off the course.”

Not directly part of the USA GOLF Collection, but still in the USA spirit, adidas is also introducing two special edition red, white and blue colorways to the TOUR360 family: a TOUR360 2.0 and TOUR360 Knit. Both footwear options will be available by June 1.