BETHESDA, Md. – The storied life and times of Tiger Woods has come down to the minutia. Well that, and the medical limitations of a 38-year-old body.

Playing catch with his son Charlie, the tediousness of rehabilitation, a little chipping and putting, and video games. “I’ve gotten damn good at video games,” he smiled on Monday.

Last we saw, Woods was closing with a 78 at Doral on his way to a tie for 25th place. Less than a month later, we learned that he’d undergone back surgery and was firmly entrenched on the extended DL.

The radio silence since that announcement has been deafening. 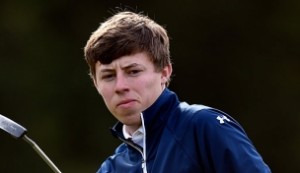 The 19-year-old will make his pro debut at the European Tour’s Irish Open, scheduled for June 19-22. The Englishman is signing with Chubby Chandler’s International Sports Management.

Fitzpatrick enjoyed a meteoric rise in the amateur game. He won the 2012 British Boys, earned low-amateur honors at the 2013 British Open, became the first Englishman since 1911 to capture the U.S. Amateur and was the leading points-earner for Team GB&I at the Walker Cup.

AUBURN, Ala. – Mike McGraw was unemployed, officially, for less than a week.

Dumped by Oklahoma State after two subpar seasons, one of college golf’s winningest coaches, one of its most respected voices, hit the waiver wire last June. Within a day, he was listening to a pitch from his longtime friend, Alabama coach Jay Seawell.

Like so many of his own recruits, McGraw verbally committed almost instantly.

The team to beat at next week’s NCAA Championship is the same one that hoisted the hardware last year: No. 1 Alabama. It’s an embarrassment of riches, really.

They have the swagger of being the defending NCAA champions.