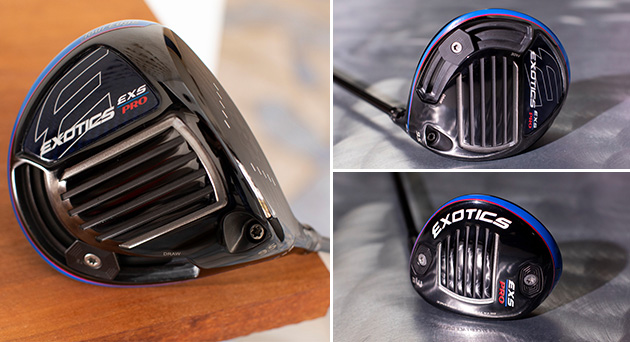 The tour-inspired metalwoods showcase the very latest in golf club design innovation for the highest levels of ultra-premium performance from the company that has earned 22 victories and over 150 different players using their equipment on the PGA Tours.

The EXS Pro Driver features a new adjustable sliding weight FlightTrack technology, while also featuring the breakthrough Diamond Face and Sound Diffusion Bar innovations that helped the Exotics EXS 220 Driver become one of the most played new drivers on the 2020 PGA Tour Champions. The new FlightTrack weight system can be easily set to draw, straight and/or fade biased positions.

The new EXS Pro metalwoods will be available for purchase on June 1, 2020 through select Tour Edge retailers and custom club fitting locations. 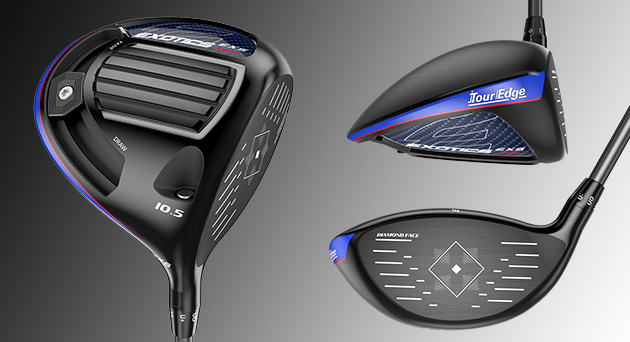 The FlightTrack weight slides from heel to toe for the ultimate control of adjustability to every area of the driver head to promote a draw or a fade and every option in between. A separate weight kit will be made available that includes 3, 9 and 15-gram weights or sold separately by weight for the ultimate in self-fitting.

The deeper face, shorter heel to toe and compact front to back is the ideal shape for the best players in the world. An extreme slope from the middle of the crown to the back of the clubhead compacts the head and manipulates a low-forward CG that should be considered a Tour-level Center of Gravity (CG) placement. Its design was made to produce the lowest possible amount of spin for faster swing speeds.

The EXS Pro Driver also utilizes Diamond Face technology, a major breakthrough in face technology that features 33 different thick and thin diamond shapes or “mini-trampolines” behind the face, producing a hotter face with faster ball speeds and better performance on off-center hits and further reduces spin. The EXS Pro Driver spins less than the EXS 220 Driver by 400 RPM’s on average.

The Diamond Face technology matched with the tour-level low/forward CG placement is the reason why the EXS Pro produces ideal launch and the lowest possible amount of spin needed for faster clubhead speeds. Finite Element Analysis has allowed the Tour Edge Engineering team to simulate and optimize face geometry across the face, creating faster and more consistent ball speeds from heel to toe.

The lower density 8-1-1 Titanium allowed for additional discretionary weight placement, enabling the Tour Edge engineers to further optimize CG location for ideal launch and spin conditions. The 8-1-1 lower-density and lighter Titanium used in the body of the EXS Pro also leads to faster ball speeds, making this one of Tour Edge’s fastest drivers ever produced, while the Beta Titanium face makes for a higher density featuring greater strength and power.

A Sound Diffusion Bars (S.D. Bar) placed strategically inside the club head vastly improves the acoustic engineering of the entire new EXS metalwood line up. The S.D. Bar and acoustic ribbing in the back of the clubhead were modeled using F.E.A. software to research fine tune and perfect the acoustical properties of the driver.

The adjustable hosel allows golfers to adjust the loft plus/minus 2 degrees up and down from the standard loft. With two lofts being offered in 9.5, 10.5 degrees, the EXS Pro has a wide adjustable range from 7.5 degrees to 12.5 degrees in loft. 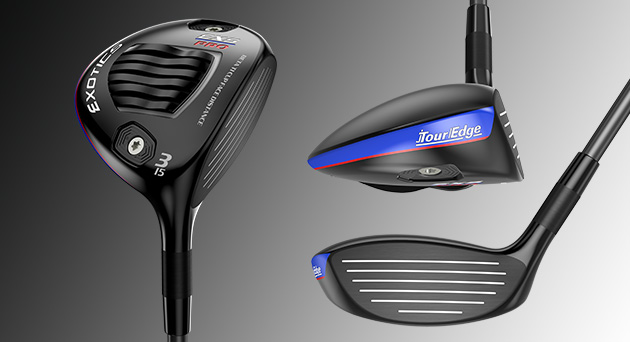 The taller face, shorter heel to toe and compact front to back is the ideal shape for the best players in the world. Designed for maximum workability, the EXS Pro features a slightly smaller 170cc tour preferred head size on the 15-degree 3-wood.

An extreme slope from the middle of the crown to the back of the clubhead compacts the head and ensures low spin and a penetrating ball flight.

The clubhead features a Flight Tuning System (FTS) that allows weighting to be adjusted for draw, neutral or fade bias.

Adjusting the FTS dual weights in these ports that are placed to the extreme heel and toe of the clubhead can drastically affect ball flight and shaping shots in this compact, low-spin design.

Individual weights and a weight kit will be made available that includes 10,15- and 20-gram weights that are interchangeable in both the EXS Pro fairway and hybrid for the ultimate in self-fitting.

The EXS Pro clubhead features a forward Center of Gravity (CG) that should be considered a Tour level CG placement designed to produce the lowest possible amount of spin for faster swing speeds.

The lower CG angle and toe biased weighting helps to close the clubhead at impact to increase ball speed and to produce a slower closure rate at impact to be an anti-left fairway metal that is desired by players with faster swing speeds.

Combo brazing is a zero-welding technology that fuses Titanium to steel, reducing weight in the face and allowing for a faster and more powerful transfer of energy from club to ball.

A Sound Diffusion Bar (S.D. Bar) placed strategically inside the club head improves the acoustic engineering of the entire new EXS Pro metalwood line up. The S.D. Bar was modeled using F.E.A. software to research and fine tune the acoustical properties of the clubhead. The S.D. Bar is similar idea employed in music studios and concert halls with diffusion panels used to enhance the richness of sound. 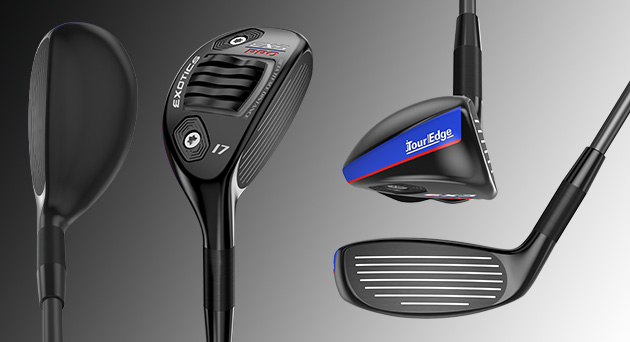 The EXS Pro hybrid features a Flight Tuning System that allows weighting to be adjusted for draw, neutral or fade bias. FTS dual weight ports are placed to the extreme heel (20 grams) and toe (5 grams) in the draw position. By switching the 20-gram weight to the toe and the 5-gram weight to the heel, it will produce a fade.

Individual weights and a weight kit will be made available that includes 10,15- and 20-gram weights that are interchangeable in both the EXS Pro fairway and hybrid for the ultimate in self-fitting.

The EXS Pro Hybrids features a Beta-Titanium face combo brazed with a zero-welding technology that fuses it onto a Stainless-Steel body, reducing weight in the face and allowing for a faster and more powerful transfer of energy. The EXS Pro is one of the few Ti-faced hybrids available in the U.S. golf market and the only hybrid utilizing combo brazing technology for the ultimate in weight savings.

A Sound Diffusion Bar (S.D. Bar) placed strategically inside the clubhead of the hybrid to improve the acoustic engineering of the club.

Tour Edge employed their TrueLoft System that ensures extra quality control methods in the bending process of unfinished EXS Pro hybrid heads and includes an extensive triple-check on loft and lie in the final stages of the club head manufacturing process. This commitment to making sure that each club head fits the exact intended loft helps players expertly dial in their preferred distances.

With six different lofts available, the EXS pro hybrid offers an unprecedented range of lofts in a hybrid to provide a loft for every possible distance scenario. The Tour Edge R&D team expects an average of six to eight yards in between each loft, giving the Exotics Pro a 36-48 yard distance gap from 16-degree to 22-degree. 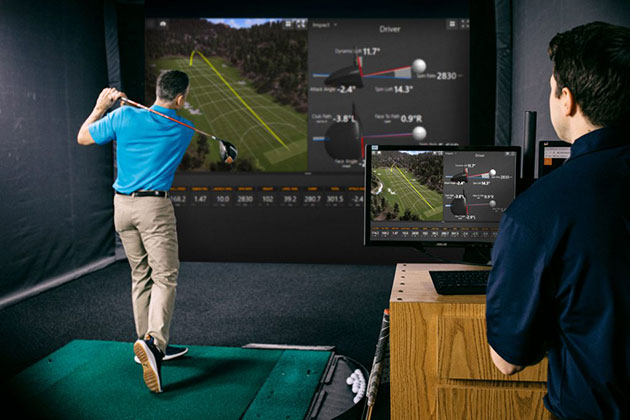 WILLOWBROOK, IL – Custom club fitter and builder Club Champion is in the midst of a phased store reopening program as retailers are being allowed to resume operations. To ensure golfers are ready for the season, the company is offering a free, Tour-level custom club fitting with an equipment purchase of $500 or more for a limited time only.

Like other retailers, Club Champion experienced significant closures as state and local mandates required residents to stay home during the COVID-19 pandemic. At one time in April, all but five stores were closed, including their Chicagoland operations facility. Though able to continue assembling custom clubs from remote locations, Club Champion’s fitting services were limited by stay-at-home mandates and inventory restrictions due to manufacturer closures. Now, the company is hoping as many as 55 of their 74 locations will be open by Memorial Day. Locations remaining closed will reopen per local retail guidelines; however, booking future appointments is encouraged.

Every Club Champion location is observing enhanced safety and cleaning procedures upon reopening. Guidelines include social distancing, frequent cleaning of equipment and disinfection of common areas numerous times per day — these guidelines are being diligently enforced at every location, along with requiring employees to wear masks as mandated in many regions.

To launch the new, unofficial start of the 2020 golf season, Club Champion is offering a rare fitting promotion at each store for a limited time: customers receive a free fitting with an equipment purchase of $500 or more. This means golfers can save up to $350 on a full bag fitting.

Each location is running the free fitting with purchase promotion for approximately six weeks from their reopening date.