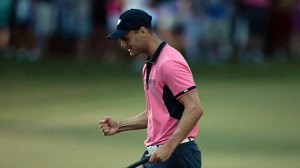 PONTE VEDRA BEACH, Fla. — Martin Kaymer produced one of the most unlikely pars on the 17th green at the TPC Sawgrass without ever going in the water. It carried him to a one-shot victory Sunday in The Players Championship that was emotional in so many ways.

Kaymer nearly blew a three-shot lead after a 90-minute rain delay until he holed a 30-foot par putt on the famous island green. He got up-and-down with his putter from short of the 18th green for one last par and a 1-under 71.

Furyk closed with a 66 — he had to wait after the rain delay to rap in a 3-foot par putt — and it looked as though it might be enough to force a playoff, or even win outright when the 29-year-old German began to crumble. Furyk had to settle for a runner-up finish for the second straight week.

Jordan Spieth, tied with Kaymer going into the final round, made his first bogey of the tournament on the fifth hole, and plenty more followed. He closed with a 74. 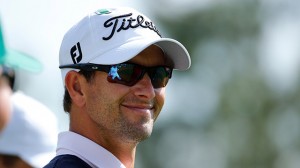 Adam Scott’s wedding a surprise, even to his guests

PONTE VEDRA BEACH, Florida — Adam Scott’s wedding was so secret that not even his guests knew about it.

One day after the former Masters champion revealed he married Swedish architect Marie Kojzar in the Bahamas, he shared a few details about how he kept the wedding a surprise — and how he managed to go three months before anyone found out.

The parents were aware, and not many more. Among players in attendance was U.S. Open champion Justin Rose, one of his best friends.

“We just said we were having a party, so come on over,” Scott said. “So then they had no idea that it was going to happen. So that was the fun little game for me and Marie to play for a while, planning it and stuff.”

They were married on April 17, the Thursday after the Australian tied for 14th at the Masters. 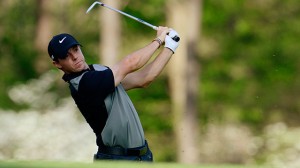 PONTE VEDRA BEACH, Fla. — The way Rory McIlroy has played the back nine at TPC Sawgrass, he should be in position to win The Players Championship.

The way he has played the front nine, he was lucky to make the cut.

Rarely has there been such a tale of two nines. Through three rounds, McIlroy was 21 shots better on the back nine. He padded that total Saturday by closing with three straight birdies for a 69, atoning for another rugged start.

“I’m 12-under par for the back nine, and I’m 9 over for the front nine,” McIlroy said. “I don’t know what it is about the front. It’s like kryptonite. I get on it and I just can’t function.”