Los Alamitos, CA – March 20, 2014 – Haus of Grey, LLC., the holding company to MATTE GREY and HEATHER GREY brands announces its partnership with Web.com Tour Professional, Sam Saunders. The California-based firm, led by Founders Travis Johnson and Kelli Marie Riley, will align Saunders with their line of sportswear for use both on and off the golf course.

“What a week for the announcement as Sam makes his 2014 PGA Tour debut this week at his grandfather’s event, The Arnold Palmer Invitational at Bay Hill,” says Johnson. “Golf is in the bloodlines of Sam, as it is in our company here at Haus of Grey and it’s a privilege to be joining hands together as we continue to build our rapidly growing brands.”

Saunders states, “I am excited to be with a company that is bringing modern fit and fashion to the golf course. The fabrics in the shirts, the classy style and performance are all spot on. It is an athletic line that I am proud to be part of.”

Riley adds, “Sam is a perfect fit for the Matte Grey brand. He lives an active, on the go lifestyle and depends on the performance of his apparel at all times. I also believe that Sam chose our brand because he was looking to join a new and exclusive team like ours where he can begin establishing his own look and legacy.”

Saunders will be competing this week in the Arnold Palmer Invitational, hosted at Bay Hill, March 20-23. 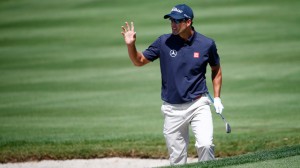 ORLANDO, Fla. – Reigning Masters champion Adam Scott was feeling ill when he arrived at Bay Hill. One majestic round with the putter Thursday made him feel a lot better.

Scott made five putts from about 20 feet or longer, two of them for eagle and one of them from off the green for birdie, and matched the course record with a 10-under 62 to build a three-shot lead in the Arnold Palmer Invitational.

The conditions were close to perfect. So was his work on the greens. 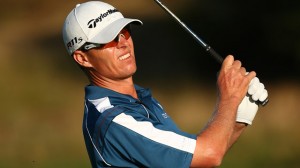 Masters field looks almost certain to be under 100 players again

ORLANDO, Fla. – It looks virtually certain that the Masters will again keep its field under 100 players, which Augusta National prefers. The Masters, with the smallest field among majors, has not exceeded 100 players since 103 competed in 1966.

John Senden’s win at the Valspar Championship made him the 94th player eligible. There are three PGA Tour events remaining where a winner could get in (Bay Hill, Valero Texas Open and Shell Houston Open). From the world ranking after the Texas Open, only Stephen Gallacher at No. 37 is a lock to get in.

That leaves Richard Sterne (No. 52) and George Coetzee (No. 56) on the outside. Neither are PGA Tour members, and there are no European Tour events remaining before the cutoff through the world ranking. Neither is in the field next week at the Texas Open.