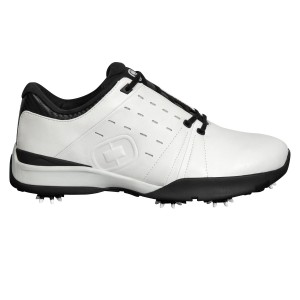 The new shoe collection is influenced by OGIO’s legacy in adrenaline sports and men’s lifestyle fashion. Each shoe features top-quality leather and OGIO’s ‘Synkfit’ insole, an internal stabilizing system that reduces the movement of your foot inside the shoe, amplifying the transfer of energy into the golf ball. OGIO’s golf shoes deliver a revolutionary “out of the box” golf experience, while enduring the strongest conditions in all types of climates.

The Race shoe combines an optimal blend of a fast look, custom fit comfort and performance through OGIO’s heritage in adrenaline sports. OGIO has gone further than the competition, using first-class technology and exotic supple leather to build a perfectly balanced frame where weight, support and traction are maximized to sharpen stability. The Race contains OGIO’s ‘Synkfit’ insole, delivering the ultimate fit and comfort customized by the user.

The City Turf Shoe is designed with the on-the-move golfer in mind. The shoe mixes a dress shoe, casual shoe and golf shoe to fit an urban lifestyle. Impeccable traction straight from the office to the sidewalk to the golf course is attained with OGIO’s proprietary Permaspyke, guaranteeing no protruding spikes. The trendy appearance boasts stylish lines and stiches that are sure to impress on and off the course. City Turf is crafted with full grain, waterproof leathers and displays OGIO’s Synkfit insole system.

The City Spiked shoe offers a fashionable look similar to the City Turf, but adds spikes into OGIO’s Ground Control traction outside. This extra feature promises golfers maximum traction and stability during the most powerful conditions. A square toe box design brings today’s favored off-course style to an elegant golf shoe while maintaining a natural foot stance. The City Spiked bears the Synkfit insole for stability and a built in lateral torsion stabilizer.

The Sport shoe embodies OGIO’s Endurance line with an aggressive look and four color choices, green, red, black and white. This model is perfect for users craving a blend of lightweight materials, unmatched breathable comfort and a modern look. With half leather and half breathable mesh, it gives natural airflow in and out of the shoe with each step while keeping the golfer steady during a swing. The Sport integrates OGIO’s XWRAP upper design with its built in Lateral Torsion Control system and Synkfit Insole to certify stability in an extremely light shoe.

“We are thrilled to announce our much-anticipated line of footwear is now hitting store shelves.” said Tom Gocke, Global VP of OGIO Golf. “This new category for OGIO will enhance a golfers experience in, yet, another part the game. We’ve already had our shoes worn in several PGA Tour events this season and have several more players already committed to wearing shoes on tour later this year. We had one player say he would wear them in one round of a professional event, for fear of new shoe blisters, and he was so impressed with them, he wore them the next 3 days as well.” 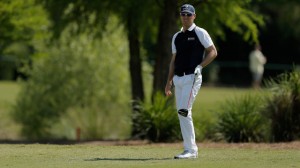 MEMPHIS, Tenn. – Ben Crane shot a 7-under 63 Thursday at the FedEx St. Jude Classic, giving him the lead in the suspended first round, as he took advantage of a 3 1/2-hour rain delay that left nearly perfect scoring conditions with no wind and softened greens.

He had five of his seven birdies on his final nine, the last a few minutes before play was suspended because of darkness.

Sixty players were unable to finish the round.

Phil Mickelson came to Memphis wanting to tune up for the U.S. Open at Pinehurst by finishing strong. He did just that Thursday. 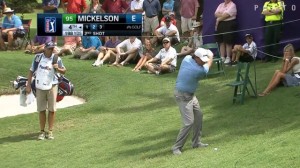 Phil was being the Thrill again on Thursday at the FedEx St. Jude Classic – and that meant he executed one of his trademark flop shots. No matter how many times I see him do this, it never ceases to amaze me.

Mickelson hit his tee shot pure on the 198-yard, par-3 fourth hole at TPC Southwind – only to see his ball land hard and bounce way into the thick stuff over the green. That left him with an almost impossible recovery – a downhill lie, 62 feet from the flag with not a lot of green to work with.

To see the video of the flop shot, click HERE.