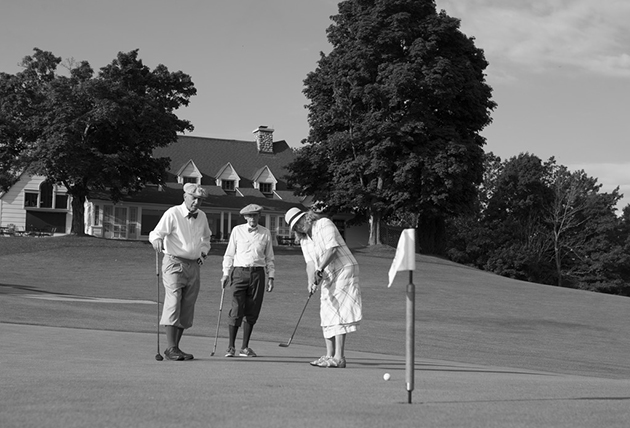 CHARLEVOIX, MI – Historic Belvedere Golf Club, which has hosted an annual Society of Hickory Golfers major championship since 2006, has been selected to host the major among hickory majors – the U.S. Hickory Open in 2019. The tournament is being planned for June 20-22 of 2019.

“Belvedere is a classic, classic course,” said Rick Meyer, the club’s president. “It is old-school in small town America. When dry and firm, it plays fast and requires a hickory style ground game. Our club and the Charlevoix community are committed to and will host a great championship.”

Meyer lends a unique perspective at Belvedere. The St. Louis resident and entrepreneur is a former board member and green committee chairman at Bellerive Country Club, which in August this year will host the world’s top golfers in the 100th PGA Championship. He has also been part of five championships, including three major championships at Bellerive in the 20-plus years he chaired the Future Championship Committee.

The U.S. Hickory Open annually attracts an international field of golfers who play with authentic pre-1935 hickory shafted golf clubs or can also play replica hickory clubs. Belvedere is the only club in the U.S. to have 44 authentic hickory club players that will participate in the championship. Competitors also dress in period appropriate apparel, including knickers, ties and jackets. The Society of Hickory Golfers celebrates and promotes the hickory game of the 1910s – 1930s.

“Here at Belvedere we have the most hickory society golfers of any club in the country. We have 44 men and women who are members here who play with authentic hickory golf clubs. They are very excited we are hosting the U.S. Hickory Open and a lot of our members will be playing in it.”

The Belvedere Hickory Open has been played 12 times at the course and is considered one of the four major championships by the Society of Hickory Golfers. It will not be presented in 2019 because the Open is coming to Belvedere but will be presented again this year June 14-16.

“I think it was just a matter of time for Belvedere to host the U.S. Hickory Open,” Joy said. “Having our restoration finished last year when a lot of the golfers came for the Belvedere Hickory Open allowed them to see some of the changes. Also, Belvedere takes care of the players and I think they feel like members for the weekend.”

“The 100th PGA Championship is the culmination event in 25 years of working with the leaders of the USGA, PGA and the Tour,” he said. “Our pro Marty Joy got me interested in hickory golf. My fellow members urged me to try it. Once they hooked me, it seemed like a natural extension of giving back to the game to respond to the desire to host something big at Belvedere, and 18 months later we received the invitation.

Belvedere’s course, which allows some public play during the golf season, was established in 1925 and designed by renowned golf course architect William Watson. It has been recognized as one of the best golf courses in the Midwest and is best known for hosting 40 Michigan Amateur Championships. It will also host the 2025 Michigan Amateur during Belvedere’s centennial year.

In 2016, the original hand-drawn architectural plans by William Watson were discovered and a two-year restoration plan returned the golf course greens, fairways and many of its tees to the original design of 1925. The changes were completed with architect Bruce Hepner’s help in time for the 2017 Belvedere Hickory Open.

“The changes in just a year of maturity are now really making a difference with the way the course is played, and by the time we host the U.S. Hickory Open it should be fully mature and playing like it did in 1925 for the hickory players,” Joy said.

Meyer said he has never satisfied his desire to improve his game but continues to try. He has read and studied the game and read about the variety of golf course design philosophies, which led him to be involved in the 2005-06 retrofit at Bellerive. It also led him with then-president Jeffrey Buntin’s support, to be involved in bringing Belvedere back to its classic design roots.

“Bruce Hepner is an accomplished student of minimalist design,” he said. “He has been a great partner who carefully and with great sensitivity to our budget coordinated the project with our indefatigable superintendent, Rick Grunch. I have been fortunate to be involved in all these championships and projects – a true labor of love!”

The Society of Hickory Golfers is currently planning for the 2018 U.S. Hickory Open in September in Greensboro, N.C. at Sedgefield Country Club.

With its fourth generation of Fold Flat push cart technology, Big Max stays ahead of the imitators with the remarkable Blade IP

UNITED KINGDOM – They say imitation is the most sincere form of flattery, so innovators like BIG MAX have to keep moving to stay ahead of the game. With its 4th generation of Fold Flat technology, BIG MAX has done just that, literally flattening the competition with the new, 3-wheel, BLADE IP.

The IP, stands for Intellectual Property, a cheeky reminder for the chasing pack, but the BLADE IP is such a standout product that it will be a hard act to follow. At a folded size of 34 ½” x 24 ½” and an incredible depth of less than 5″ the BLADE IP is hands down, the most easily stored and transported push cart on the market. In its folded state it fits in virtually any car’s trunk with a full golf bag placed on top. If space is truly an issue then the IP will slide neatly behind the front seats with its carry case (sold separately) keeping everything clean.

While the BLADE IP matches the flattest of BIG MAX’s carts, the real step forward for the IP is the folding mechanism. Once the height adjustable handle is folded down, simply fold the cart flat and lift the BLADE IP to see the back wheels automatically flip under the body. With a push of a button on the front wheel, the whole cart folds flat and is ready to be packed away.

Aside from its unique folding and storage qualities, the BLADE IP stands out for its robust, stable construction, that is backed up by a 5 year warranty, and its ease of use on the fairways. Adjustable bag brackets accommodate even the largest Tour bags and the double foot brake keeps the BLADE IP in place even on the hilliest courses. Integrated drink holder, storage compartment in the handle, ball, tee and double scorecard holder keep all your necessities close to hand and multiple Quick Lok and Quick Fix bases are ready to clip in BIG MAX accessories such as an umbrella holder, GPS holder, sand bottle holder, BIG MAX Super Net and BIG MAX Drop Stop Rain system.