With a premium full-grain waterproof leather upper and full-length Lunar drop-in sockliner for lightweight, responsive cushioning, the Lunar Adapt is as comfortable as it is classy. The crafted, low-profile design allows for incredible ground feel and casual wear while a rubber cupsole construction offers superior stability.

“We wanted to create a shoe that women want to wear when they’re playing golf just as much as they want to wear when they’re hanging out with their friends,” says Carl Madore, Nike Golf Innovation Design Lead. “The Lunar Adapt has all the performance technology golfers need, like Integrated Traction and Lunarlon cushioning, within a versatile design that make it great for everyday wear.”

Since introducing Integrated Traction technology in footwear in 2010, Nike Golf has continued to improve the tread design for a combination of incredible traction and off-course comfort. The iconic Nike waffle sole featured on the Lunar Adapt provides a more aggressive tread for superior grip and control, while echoing Nike’s deep roots in athletic footwear. 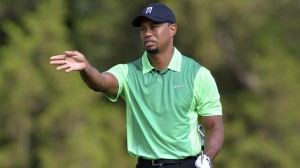 BETHESDA, Md. – Tiger Woods was back on the PGA Tour for the first time in more than three months on Thursday and said he felt “fantastic.”
He was talking about his back, not his game.

One day into his most recent return from injury, that’s what mattered to him.

Woods opened with two straight bogeys, made five more bogeys in a seven-hole span around the turn at tough Congressional and finally found his groove late in the opening round of the Quicken Loans National for a 3-over 74.

Woods was tied for 83rd – only 19 players had a higher score – and he will have to score better on Friday if he wants to avoid missing the cut for the first time in two years.

Compton beginning to be known for golf as well as heart

Erik Compton is two strokes off the early lead after an opening 68.

Erik Compton is on the cusp of qualifying for his first Open Championship.

Erik Compton’s fifth question following his solid start at the Quicken Loans National may as well have come from one of the team of doctors that have turned the 34-year-old into a medical miracle.