Vista, CA – 6/28/14) – Total domination comes to mind when talking about Fujikura’s showing at last week’s RBC Canadian Open. First, second, and third place at the beautiful Royal Montreal Blue Course all played Fujikura on their ways to a great week. The winner played a Fujikura Motore Speeder VC 7.2 TS in his 5 wood. The runner up was using a Motore Speeder VC 6.2 in his driver and a VC 8.1 in his 3 wood while third place used a Motore X shaft in his 3 wood.

Overseas at the Senior Open Championship, one player managed to sneak into the top-3 using the timeless Speeder 904HB shafts in both of his hybrids.

Darrell Survey reported Fujikura as the #1 driver shaft brand at the Senior Open Championship and RBC Canadian Open. The number of players using Fujikura shafts on the professional circuit has been on a steady incline with the release of the new Motore Speeder 757 this year along with the PRO series and the 2013 released Fuel shaft (longest distance driver shaft currently on the Tour). Also creating a lot of buzz is a highlighter yellow “Precursor ” model (Fujikura’s prototype brand) which has been spotted on Tour and has a lot of Fujikura enthusiasts guessing at what the performance leading shaft company has in store for next season. 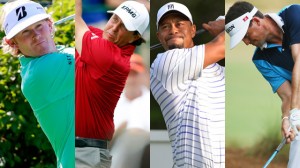 AKRON, Ohio – The landmark at Firestone Country Club is among the most popular in America, a massive water tower in the shape of a golf ball on a tee.

Tiger Woods has reason to see only a big ATM machine.

Woods has eight wins at Firestone, one more than Matt Kuchar has won on the PGA Tour. In 15 appearances, he has made $11.06 million, which is roughly the same as Tom Watson has made in four decades on the PGA Tour.

OK, that’s not a fair comparison. Watson played at a time when total prize money at tournaments was about the same as a first-place check today. Firestone featured the biggest payoff on the PGA Tour schedule – majors included – when Watson won in 1980. He earned $100,000.

Then again, Watson might be the perfect reference point for the peculiar plight of Woods. 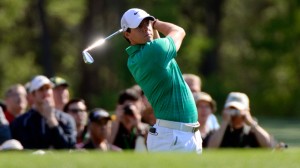 Rory McIlroy ready to get back to work, focused on ending year strong

AKRON, Ohio – The claret jug is not out of sight. Rory McIlroy is just trying to get it out of his mind.

McIlroy had plenty of fun with golf’s oldest trophy after his win in the British Open. He celebrated with friends in England, took the jug out for a night on the town in Belfast with his buddies, and brought it with him when he returned home to Florida. And yes, it’s with him at Firestone this week at the WGC-Bridgestone Invitational.

“I’ve sort of been taking pictures of it beside the TV and on top of the toilet and wherever it’s been,” he said. “It’s definitely nice to have it in my possession.”

And now it’s back to work.