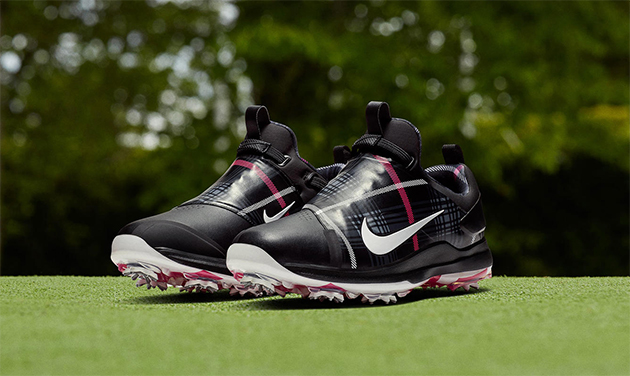 Nike Footwear, Headwear, and Apparel Will Be on Display at The 2018 Open Championship

BEAVERTON, OR – This year, the Open Championship will be held in Scotland at Carnoustie Golf Links. Thirty athletes will don Nike headwear, footwear and apparel at the third major in 2018. Nike athletes Patrick Reed and Brooks Koepka captured wins at the first two majors this year.

A special tartan print will be featured prominently on various polos, hats and shoes. The print is unique to Nike and was designed in-house. The word NASTY can be seen on the outsole of the shoes featuring the print, a reference to the historic course. Each athlete has the opportunity to wear those special-edition shoes during the tournament. The special-edition print will be seen on the Tour Premiere, Lunar Control Vapor 2 and Lunar Command 2.

A black-based Tour Premiere with the tartan print will be available at retail in limited quantities in both North America and EMEA. A Shoe Stream post will go live on news.nike.com the week of the tournament to support the shoe, so be on the lookout. 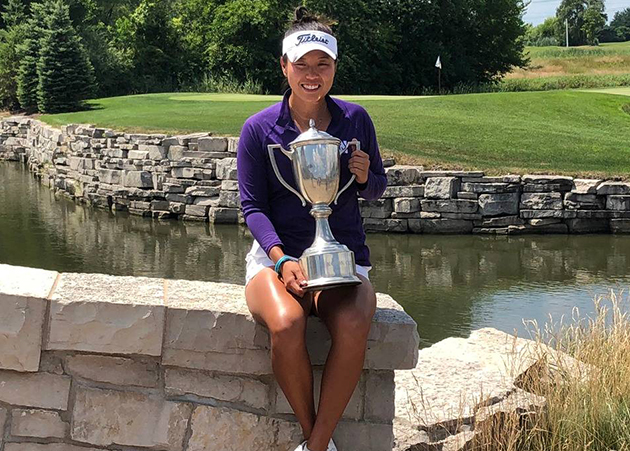 ROMEOVILLE, IL – Hannah Kim couldn’t quite win the Phil Kosin Illinois Women’s Open (IWO) in her amateur days. On Wednesday, though, it was a different story. Kim smashed most of the scoring records in the 24th playing of the championship en route to a six-stroke victory at Mistwood Golf Club.

Two-years ago Hannah Kim tied for third in the IWO and last year she was the runner-up to Alexandra Farnsworth, a Vanderbilt University golfer. Kim still had collegiate eligibility at Northwestern then. As soon as her senior season ended in June, however, Kim turned pro and her first professional victory was fittingly in the IWO.

Kim, the stalwart of coach Emily Fletcher’s powerhouse Wildcat teams of the past four years, did some major re-writing of the tournament record books.

“Mistwood suits me well,” said Kim, “but I go into all my tournaments without any expectations.”

That formula worked to perfection this week. Kim posted rounds of 68, 65 and 67 for a 16-under-par 200 total for the 54 holes. She tied the tournament record for low 18-hole score with her second-round birdie blitz. That gave her a six-stroke lead entering Wednesday’s final round as well as the tournament record for low score through 36 holes (133).

Her final score was a whopping seven strokes better than the previous mark held by a pair of amateur winners, Annika Welander in 2005 and Stephanie Miller in 2016. Even with her victory, Kim admitted to missing her college team.

“It’s hard with nothing getting paid for now,” she said, but that won’t be much of a problem if Kim keeps on winning pro tournaments. She is 26-under-par on her nine IWO tournament rounds over the last three years with this year’s showing the most impressive.

“My target score was double digits under par, and I did it,” said Kim, who earned $5,000 for the victory in her third professional tournament. A resident of Santa Ana, Calif., she had previously competed in the Ohio Open and California State Open. Next up is the Tennessee Open.

“I’m just trying to play a bunch of tournaments to keep myself sharp. I want to make it through (LPGA) Tour School and get my card,” said Kim. That competition starts in the fall. 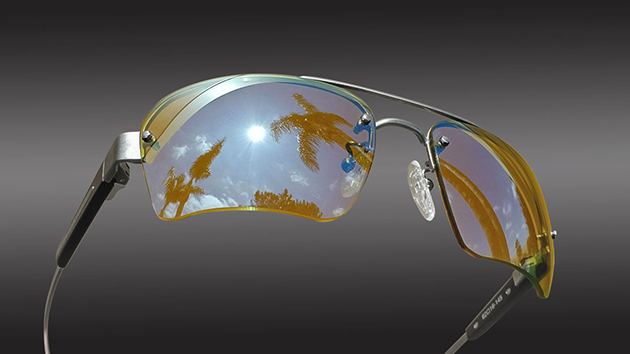 HUNTINGTON BEACH, CA – Scheyden Eyewear, known as the finest eyewear in General Aviation, carries its quality, comfort, and function into the golf industry with its latest product release. The ‘Confidence In Action,’ or the “CIA,” golf-specific sunglasses are expected to officially launch in late July.

Scheyden, a supplier to the United States Air Force Thunderbird Team, focuses on activities that require the highest quality in terms of comfort, function, and lens clarity. A complete round of golf can be very similar to a pilot flying a 4 or 5-hour mission. Fatigue is always a factor during a long day of intense focus and concentration. Scheyden has brought to the forefront a “golf-specific” frame and lens combination with a level of quality that has not yet been seen in the industry.

Jeff Herold, pilot, golfer, and CEO of West Coast Trends, Inc. explains, “Our goal here at Scheyden Eyewear is not to simply impress those who regularly wear sunglasses on the golf course, but furthermore, to impress those that have never been able to wear sunglasses during a round of golf. If you take note of the PGA Tour, more than half of the players never wear sunglasses, primarily because they believe it somehow hinders their game. If we can bring to market a product that will not only protect a player’s eyes, but actually enhance their ability to see and play with confidence, then we have hit a grand slam home run.”

The golf-specific ‘CIA’ is handmade in Japan and features a feather-light, incredibly strong, titanium frame with a high definition, dye infused, LT33 polymer lens. The lens is a decentered eight base, 33% Light Transmission wrap. This lens that actually appears to brighten and sharpen your vision on the golf course yet still provides 100% UVA and UVB 400nm protection. The LT33 lenses are top drill mounted eliminating 60% of the lower frame and allowing for an unobstructed view while addressing the ball. The frame also includes adjustable, oversized, soft, tacky, silicone nose pads that will keep the frames comfortably in place during the most powerful of golf swings. Herold adds, “When blending dyes to colorize the tint on any lens one must consider the reaction that the ‘visible light spectrum’ has on the human brain. After several attempts in blending the dyes, we feel we have found the perfect sweet spot within the visible light spectrum that will create the perfect contrast and color for the game of golf. This sweet spot will allow the player to put the Scheyden CIA’s on and keep them on during the entire round, including while performing shots in the shade of a tree.” A “sensitive eyes” slightly darker lens within the same light spectrum is on the horizon.”