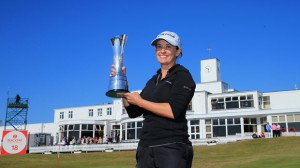 Mo Martin had yet to record an eagle on the LPGA Tour this season. The diminutive 5-foot-2 golfer isn’t known for her length but instead for her accuracy.

Yet on the 72nd hole of one of golf’s biggest stages, the girl known as “Mighty Mo” delivered a shot for the ages that resulted in an eagle and made her a major champion.

On the par-5 18th at Royal Birkdale, Martin hit a three-wood that struck the pin. It left her with a six-foot putt for eagle and put Martin in the clubhouse at 1-under-par. With three of the best players in the game still on the course with a few holes remaining, Martin had to sit and wait for an hour before learning that she was the 2014 RICOH Women’s British Open champion.

“It’s still soaking in, along with the champagne on my jacket,” said Martin, who was doused by many of her fellow LPGA players after her win. “This is just unbelievable. It’s literally a dream come true.” 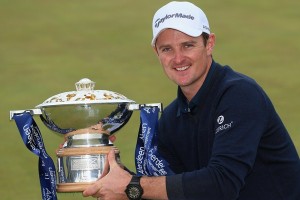 Justin Rose produced a flawless final round to win the Aberdeen Asset Management Scottish Open and head into The Open championship on the back of consecutive victories.

Tied with home favourite Marc Warren going into the final round at Royal Aberdeen, the World Number Six holed long putts at the second, third and fifth as he birdied four of the first six holes and never looked like being caught.

Further gains at the ninth and 12th cemented a closing 65 and 16 under total, two shots ahead of Sweden’s Kristoffer Broberg.

Tiger Woods will compete in his first major championship of the season in apparel from the Nike Golf Tiger Woods Collection. The three-time Open Champion will stay warm in the TW Engineered Sweater ($140) with 3D engineered-knit sleeves developed with Woods’ insights. His insights inspired the same sleeve design in the 3D V-Neck Sweater.

Rory McIlroy will brave the elements at Royal Liverpool in the new Hypervis Half-zip Cover-up ($85). Featuring engineered fabric bonded onto a Therma-FIT fleece, the Hypervis Half-zip has strategically-placed ventilation – athletes will stay warm but won’t overheat. The fabric is super lightweight, providing warmth without bulk. A range of vibrant colors like Volt, Hyper Cobalt and Hyper Pink pop through the ventilated portion of the cover-up.

How will Nike Golf athletes like Paul Casey, Charl Schwartzel and Nick Watney stay warm? The 3D V-Neck Sweater ($130), a poly-wool blend constructed with 3D engineered-knit sleeves that trap heat while allowing for maximum range of motion. The knit is fabricated to be elevated in certain zones to contain heat and offer flexibility, and tighter around places like the elbow to reduce material and weight.

“Our athletes will be prepared for every possible weather condition at Royal Liverpool,” says Merritt Richardson, VP of Global Golf Apparel and Footwear. “Every piece of apparel – from polos to sweaters to cover-ups – is made for easy layering and built to move with the athlete’s body. We’ve armed our athletes with some of Nike Golf’s newest and most innovative pieces from the Fall 2014 collection to keep them warm and comfortable no matter what each round brings.”

To see what all of the Nike Golf athletes will be sporting, click HERE. 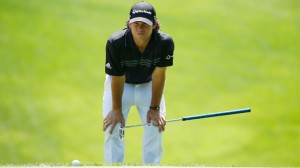 The 27-year-old, in his third full season on the PGA Tour, hadn’t been in the final twosome in the final round until Sunday. He held the lead entering the final round of the John Deere Classic, and looked at the scoreboard after hitting a poor shot into the eighth green.

“I saw the guys were playing well, so that’s when I felt it, but I was able to hit three really good shots on No. 9 to birdie, and that kind of got me going,” Harman said.

He kept going all the way to his first victory on the Tour, using three straight birdies down the stretch to hold off Zach Johnson by one stroke.