CARLSBAD, CA – TaylorMade Golf Company, an industry leader in golf innovation and technology, announced today the release of the new Spider Interactive Powered by Blast putter, engineered in collaboration with Blast Motion and SuperStroke Golf to advance how golfers of all skill levels capture, analyze and progress their game where strokes matter most — on the greens.

Spider Interactive automatically captures valuable stroke metrics in a seamless, non-intrusive design built into the top of the putter’s grip. TaylorMade has also co-developed a matching mobile app — available on March 1 for iOS and in Q2 2018 for Android users — which takes the user on a simple, intuitive journey to become a better putter. Spider Interactive measures key putting stroke metrics including timing (backstroke time, forward stroke time, tempo), impact stroke speed and face rotation. Users will be able to easily analyze details of their putting stroke and track progress over time with performance history and interactive graphs, along with tiered training modules and drills to help improve putting. The app will also feature video recording and playback capabilities so users can review and analyze their strokes. YouTube golf instructional personalities Me & My Golf will have tips and tutorial videos on the app for further developmental content. 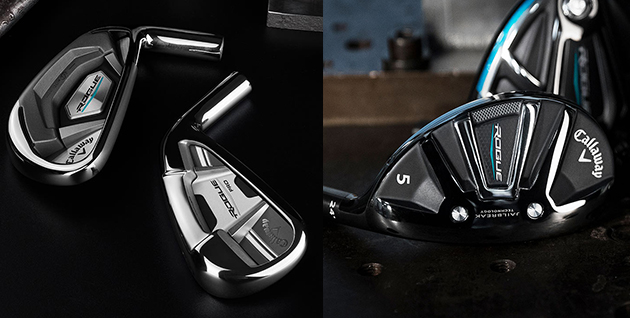 How Distance Should Feel

CARLSBAD, CA – The new Rogue Irons embody the Rogue philosophy to break away from established protocols to develop new ways to extract maximum performance from a golf club. These irons feature a premium multi-material construction to combine new technologies with advancements to our industry-leading technologies that have helped us become the #1 Iron Brand in Golf. By pushing ourselves to reach unprecedented performance levels, we’ve created the best combination of distance, accuracy and playability ever in a Callaway iron.

Rogue irons combine our renowned 360 Face Cup technology with Variable Face Thickness (VFT) technology to expand the portion of the face that delivers fast ball speed. Face Cup employs a shallow, flexible rim around the perimeter of the face that flexes and releases at impact to increase ball speed. VFT also influences how the face itself flexes to promote more ball speed on off-center hits. The combination of these two technologies promotes ball speed and distance.

Tungsten Weighting allows us to position the CG in each of the long irons with extraordinary precision, promoting optimum launch and control at each individual loft. The tungsten, twice as heavy as steel, concentrates significant weight into a small space in the form of an intricately shaped part, which is key to precisely controlling CG location.

Urethane can be used to dampen vibration to improve sound and feel, but it can also greatly reduce the face’s ability to flex, lowering COR and ball speed. Our elasticurethane microspheres provide the sound and feel benefits of urethane without compromising COR or ball speed.

Rogue is the most powerful hybrid that Callaway has ever created. And it’s the first time ever that we’ve engineered our revolutionary Jailbreak Technology from our drivers into a hybrid. The synergy of Jailbreak and our Hyper Speed Face Cup (which has taken us to #1 in the hybrid category*) makes Rogue a pioneering achievement. Along with their power, they are also super-easy to launch and versatile for the total performance package.

Callaway R&D has successfully installed our groundbreaking Jailbreak Technology in a hybrid for the first time, with two steel Jailbreak bars that stiffen the body, placing more impact load on the face to promote ball speed and distance.

Our proprietary Internal Standing Wave allows us to precisely locate the CG with tremendous precision. The ISW positions the CG lower and forward to promote easy launch. 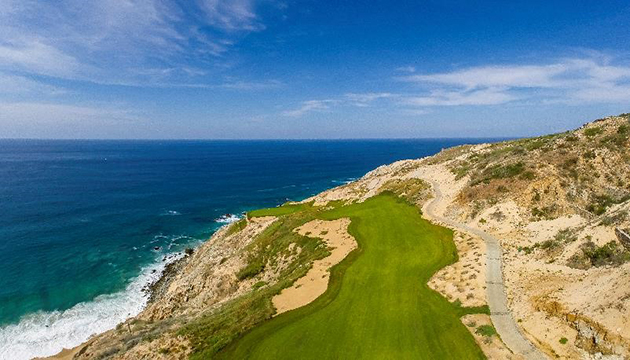 Los Cabos, Mexico (Jan. 18, 2018) – Quivira Golf Club, the epic Jack Nicklaus-designed course set along the mesmerizing seascape at the tip of the Baja Peninsula, has been selected as one of the World’s 100 Greatest Golf Courses by Golf Digest magazine.

A first-time member of the elite 100, Quivira Golf Club is one of only four courses in Mexico included.

Marked by sheer granite cliffs, huge windswept dunes and rolling desert foothills 10 minutes from downtown Cabo San Lucas, Quivira Golf Club has captivated the attention of golfers worldwide since its inception in 2014. A par 72 that plays to a maximum of 7,085 yards, Quivira offers more oceanfront exposure than any other course in Los Cabos, combining breathtaking vistas with unforgettable challenges.

That intoxicating mixture did not escape Golf Digest’s expert panel of international judges.

“To see photos of Quivira’s cliffhanging fifth and sixth greens, one would expect this to be a mountainous golf course,” the magazine reports. “But a majority of its holes are on Pacific coastline sand dunes close to sea level or along the flank of a high desert plateau dotted with torote and cardon trees.”

“Still, what earns the attention here is the par-4 fifth, its tee at 278 feet above sea level and its green at the far end of a ribbon fairway 107 feet below,” the magazine description adds.

The third biennial ranking of the World 100 Greatest Golf Courses is the first to be dedicated exclusively to global layouts outside the United States. The World 100 Greatest uses a single criterion of overall greatness scored by international panelists, including Americans, organized by Golf Digest affiliate magazines around the world.