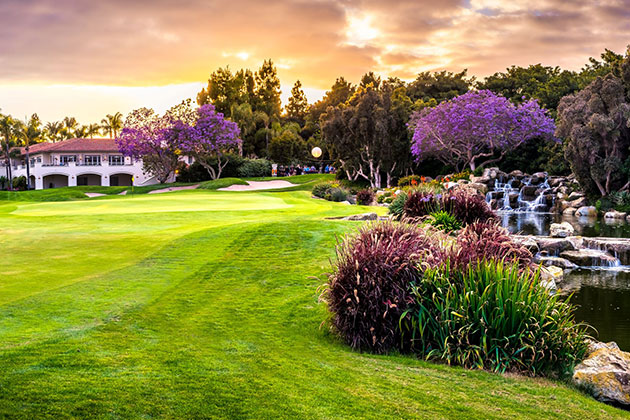 CARLSBAD, CA – Visit Carlsbad, the destination marketing organization for the Pacific Coast town of Carlsbad, California, invites golfers from across the country to experience the area’s top golf resorts, golf courses, and leading hotel properties as the organization further promotes the sunny region as one of America’s top golf destinations.

Carlsbad features a rich golf history
Originally developed as an amenity-driven playground for well-heeled celebrities and athletes, OMNI La Costa Resort & Spa has a warm, relaxing vibe that charms you from the moment you step onto the property. You can feel the rich history, which dates to the early 1960s, echoing through its grounds.

By the mid-1960s, La Costa had become the go-to spot for Hollywood’s elite. The golf course received international praise and was routinely played by Frank Sinatra, Dean Martin and Bob Hope. In the early 1970s, renowned Pancho Segura was the resident tennis pro and La Costa became the tennis epicenter with Charlton Heston, Johnny Carson and Desi Arnaz exchanging rallies during their visits.

The crown jewel of La Costa, The Spa, was a refuge for some of the world’s most powerful people, including Richard Nixon, Jackie Kennedy and Chief Justice Earl Warren. La Costa had quickly established itself as the top destination for Hollywood stars who wanted to experience “The La Costa Lifestyle.” Omni La Costa is home to 36 holes of historic championship golf on its Champions and Legends Courses, having hosted the PGA TOUR’s Tournament of Champions from 1969 – 1989.

Aviara plays host to the LPGA
The Park Hyatt Aviara Resort Golf Club and Spa is a premier luxury resort featuring the region’s only Arnold Palmer-designed golf course. Since 2013, the resort and golf club has played host to the LPGA JTBC Classic. The resort spreads across 200 acres and features a stunning sophisticated Spanish colonial-style hotel. The luxe getaway recently underwent a major $50 million transformation that included new dining concepts, reimagined rooms, pool areas, and fresh stunning ocean views from the new lobby. Golf Digest has named the resort among its “33 most female-friendly golf trip destinations.”

Opened in 1991, the highly acclaimed Palmer design overlooks the beautiful Batiquitos Lagoon, a three-mile stretch of inland water ranked among the finest private wilderness preserves in the country. With its scenic setting, the course layout boasts undulating greens and wide fairways that meander through the coastal hills with dramatic vegetation scenic rock outcroppings, and cascading waterfalls and streams.

The Crossings at Carlsbad, located just one mile from the Pacific Ocean, was designed by Greg Nash. The popular municipal course is regarded as one of the best in Southern California. With the Pacific to the west and the southern California Peninsular Mountain Ranges to the east, the course’s scenery is truly jaw-dropping. Named for the five bridges golfers cross over canyons during the round, the course will take you across rugged terrain and through canyons and wetlands accentuated with sagebrush and native flora. The course also sits adjacent to the luxury Sheraton Carlsbad Resort & Spa, a convenient spot for golfers to stay and play.

Along with the Park Hyatt Aviara and La Costa golf resorts, Carlsbad features other sensational resort destinations like Cape Ray, Carlsbad Beach, a Hilton Resort & Spa, nestled on the coast and just steps from the Pacific Ocean. Hilton also operates the beautiful Cassara Carlsbad that also overlooks the ocean. The Westin Carlsbad Resort & Spa, Four Seasons Aviara Residence Club, and Sheraton Carlsbad are also perfect spots for golfers to base themselves when playing the areas world-class golf. If resorts are not your vibe, make sure to check the variety of hotels in the area for stay and play packages.

Golf Equipment Capital
Carlsbad is also known as the golf equipment capital of the world, playing home to most of the top club manufacturers like Titleist, Callaway, TaylorMade, Cobra and Honma, among other golf brands. Golf aficionados and club geeks who visit the area can also experience the best in custom club fitting through some of the game’s top performance centers like the Titleist Performance Institute, Ely Callaway Performance Center, TaylorMade Kingdom and Scotty Cameron Putting Studio. 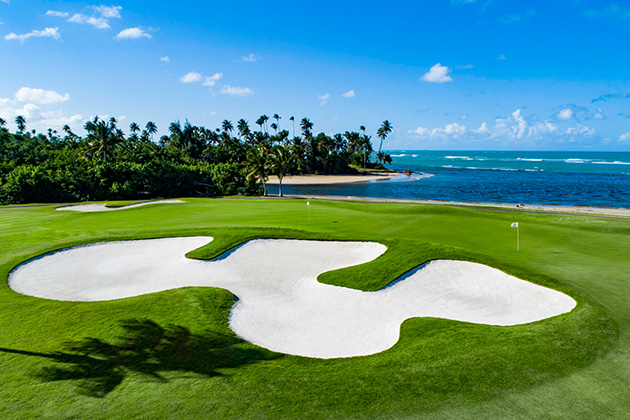 SAN JUAN, PUERTO RICO – When the PGA TOUR arrives for the 14th playing of the Puerto Rico Open next week, not only will many of the best players in the world be competing on the Championship Course at Grand Reserve Golf Club, but they’ll be kicking off the first of several elite championships that are combining to make Island golf history.

Following the Puerto Rico Open, the U.S. Women’s Amateur Four-Ball Championship will be played at Grand Reserve, April 20-24, 2022. This marks the first time a United States Golf Association championship is being held outside of the U.S. mainland in a U.S. territory.

Making it three extraordinary golf events in less than 12 months will be the 2023 Latin America Amateur Championship (LAAC), to be held Jan. 12-15 at Grand Reserve. Like the USGA Women’s Four-Ball, this will be the first time the LAAC will be held in Puerto Rico. The tournament champion will receive an invitation to compete in the 2023 Masters Tournament at Augusta National Golf Club and the 151st Open at Royal Liverpool in England.

Meanwhile, the 2022 Puerto Rico Open is poised to crown yet another exceptional champion amid the Island’s tropical splendor. Some of the PGA TOUR’s biggest names and rising stars have won or finished runner-up here. These include Bryson DeChambeau, Viktor Hovland, Jordan Spieth, Daniel Berger, Jason Day, Tony Finau and Retief Goosen, all either winners of Major Championships or currently ranked in the top 20 of the Official World Golf Ranking.

The tournament will be contested on the Championship Course (Tom Kite design) at Grand Reserve, an amenity of the Hyatt Regency in Rio Grande. Among other events, two Pro-Am competitions – in which amateur golfers play with the PGA TOUR professionals – will take place prior to the tournament, which will be played March 3-6. The Puerto Rico Open prize purse increased to $3.7 million this year.

Golf courses are located throughout the Island with many in the Northeast near San Juan. Puerto Rico is an enchanting destination where history, gastronomy, nightlife, and natural wonders abound. It requires no passport for American citizens, is bilingual, uses the U.S. dollar for currency, and is the air hub of the Caribbean. There are more than 4,000 restaurants, and lodging options range from top hospitality brands to being named a top 10 Airbnb world destination.

Players, fans and Golf Channel viewers will get to see why Puerto Rico has received numerous accolades as a top golf and travel destination, including being highlighted in LuxeGetaways, Golf, Golfweek, Golf Digest, NY Times, Coastal Living, Forbes, Vogue, and many more.

The Puerto Rico Open is airing on Golf Channel Thursday through Sunday of tournament week. Specific times to be announced closer to the tournament.