Here’s the G2 Big Dog. The Big Dog is a CNC milled mid-mallet made of 303 stainless steel. The amount of feel that you get from it is unreal. It very nearly acts as an extension of your limbs. Heel and toe miss hits compensate very nicely and still keep course with minimal dispersion.

“The winner of the Colombia Championship has played OBAN for many years and is a long time supporter.” said Pete Sanchez, Senior VP of Business Development of OBAN.  “It was really great to see him win the first tournament of the Web.com season with 2 OBAN Devotion shafts in his bag.” 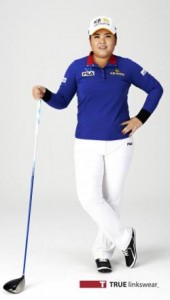 “To have someone of the stature of Inbee Park join our roster of brand ambassadors is a testament to the performance and excellence of our shoes,” said Jeremy Moore, president of TRUE linkswear. “Inbee has established herself as the most dominant women’s golfer in the game, and her passion for and approach to the game parallel ours. We’re excited about this new partnership and honored she has chosen to wear TRUE on the LPGA Tour.”

The 25-year-old Park, a native of South Korea, is currently ranked No.1 on the Rolex Women’s World Rankings and captured 2013 LPGA Player of the Year honors. Last year, she put together one of the most dominating stretches of golf in recent history, reeling off victories in three consecutive majors (the Kraft Nabisco Championship, LPGA Championship and the U.S. Women’s Open) and earning six titles overall.

Park plans to initially wear the TRUE isis on the LPGA Tour.

Co-founded by Ryan Moore, a three-time winner on the PGA TOUR, TRUE is the innovator of the barefoot movement in the golf footwear industry.  The company has enjoyed sustainable growth year-to-year, placing an emphasis on innovation and the delivery of a superior product that can truly enhance the golfer’s experience. 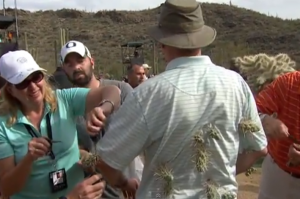 We’re still not clear on what exactly happened here yesterday. All we know is that Rory McIlroy tried to punch out of some desert junk, hit someone or something, and a man ended up with large chunks of cholla cactus in his back.

The last time the PGA Tour was in Arizona, a Scottsdale-area cactus plunged its needles into Kevin Stadler’s golf ball, holding it in mid-air and causing the then Phoenix Open leader to abandon the ball. This one looked much more painful.