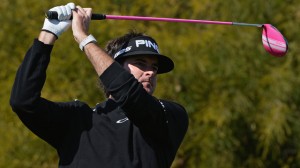 LOS ANGELES — Bubba Watson wasn’t about to let another chance get away.

Two weeks after Watson made a pair of late bogeys in the Phoenix Open, he delivered the best closing round at Riviera in some three decades. Watson played the final 39 holes without a bogey and shot a 7-under 64 on Sunday to win the Northern Trust Open.

It was his first victory in 22 months and 41 tournaments worldwide dating to the 2012 Masters.

Watson wound up with a two-shot victory over Dustin Johnson, who closed with a 66 for the second straight week and got the same result.

This wasn’t Bubba golf as much as it was simply great golf.

Watson, who also shot 64 on Saturday to start the final round four shots behind William McGirt, made up ground so quickly that he broke out of a four-way tie for the lead with a birdie on the eighth hole and made the turn in 30.

MELBOURNE, Australia – Karrie Webb won the Women’s Australian Open for the fifth time Sunday, shooting a 4-under 68 in the final round to beat Chella Choi by one stroke.

Webb birdied the 18th hole to take the outright lead, then watched as Choi, who shot a course-record 62 on Saturday to take a share of the third-round lead, pushed a 10-foot putt wide of the hole at 18 to miss the chance for a playoff.

”I got off to a great start and I just did a great job mentally today,” Webb said. ”I can’t think of another time when I held myself together as well as that.”

The win marked a remarkable change of fortune for the No. 8-ranked Australian, who was disqualified from last week’s Australian Ladies Masters after signing an incorrect scorecard. She had been the defending champion at the event. 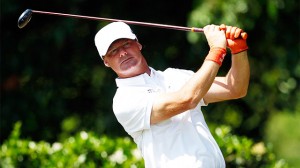 BOGOTA, Colombia — Alex Cejka won the Web.com Tour’s season-opening Colombia Championship on Sunday, breaking the course record with an 8-under 63 in the completion of the third round before rain washed out play.

The 43-year-old Czech-born German played the final 16 holes of the third round Sunday morning at water-logged Bogota Country Club, birdieing four of the last five holes to reach 14-under 199.

Cejka was halfway through the final round when play was suspended and the round wiped out. At the time, he had a one-stroke lead over Andrew Putnam.

“It’s been a long time,” Cejka said about the victory. “I had a feeling the rain might come again. I just tried to hang in there. I knew it was going to be tough this afternoon, so I was just grinding.

“Unlucky or lucky, depending on how you see it with the weather. It’s nice to win. It doesn’t matter on what tour these days because there are so many great players.”