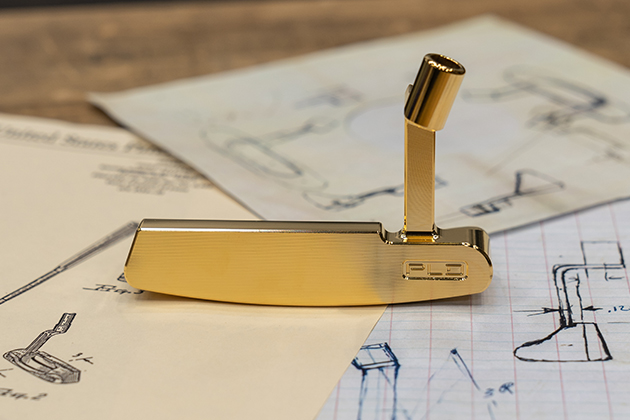 PHOENIX, AZ – A gold-plated, fully milled, stainless-steel PLD Anser Patent 55 putter is the fourth and final collector’s model being offered as part of a year-long celebration acknowledging the issuance of the Anser putter patent 55 years ago. It is available exclusively through pingpld.com beginning Monday at 2 p.m. ET.

Only 55 of the precision-milled, handcrafted putters, which are made in the USA and serialized, will be available via the website for $990 (limit one per customer). The first three models sold out within minutes, so those interested are encouraged to plan accordingly.

Choosing to gold-plate the final version of the collection is a tribute to the Anser’s unmatched record of winning, which led to its prominence in PING’s world-renowned Gold Putter Vault — a tradition started by PING Founder Karsten Solheim in the early 1970s and home to more than 3,200 gold-plated PING putters, each representing a victory. Since its invention in 1966, the Anser has won more than 700 professional tournaments around the world.

“I can’t think of a better way to complete this wonderful celebration of the Anser putter and its game-changing patent,” said PING Executive Chairman John A. Solheim, who custom built the very first Anser putters in the family garage as a teenager. “Our tradition of awarding gold-plated PING putters to tournament champions has arguably created the most valuable collection of putters in the world. It’s a great source of pride for us, and golfers who have a chance to visit the Vault stand in amazement as they soak in its place in history. The Anser putter occupies the most space by far in the Vault, so it’s only natural we’d offer a gold-plated version to complete the PLD Limited collection.”

Granted on March 21,1967, by the U.S. Patent office and assigned the number D207-227, the game-changing Anser patent set the standard in putter design that still dominates the winner’s circle today, including 20 major championships.

The history of the famous design is well-chronicled, from it first being sketched by Karsten Solheim on a 78-rpm record sleeve to his wife Louise’s idea to name the putter Anser, cleverly suggesting Karsten leave out the letter “w” in the word answer to ensure the name would fit on the back of the putter. Earning its first PGA Tour win at the 1966 Florida Citrus Open, just over a month after its introduction at the Phoenix Open, the Anser’s instant popularity changed the trajectory of the company practically overnight as demand grew so quickly it necessitated a move out of the family’s Scottsdale, Ariz., garage and into a small building in north Phoenix to keep up with production. The original building still stands at the company’s 50-acre headquarters.

The Anser is also famous for its influence on other putter designers in the golf industry, many of whom celebrated the day the patent expired.

“A lot of time has passed since the invention of the Anser putter,” said John A. Solheim, the youngest son of Karsten and Louise. “We think it’s important to remind the golf industry and some of the younger golfers that the familiar putter design they see with other brands’ name on it was created by Karsten in his garage in the mid-1960s. I was fortunate to be at his side building the first Ansers and continued to do so for many years. It was among Karsten’s many contributions to the game that eventually earned him induction into the World Golf Hall of Fame, the only manufacturer to be so honored. We’re flattered that the design has had such a significant influence on putter design for the last 55 years and we think this is a great time to celebrate its continuing success by offering golfers a piece of PING history with the introduction of the PLD Anser Patent 55 model.” 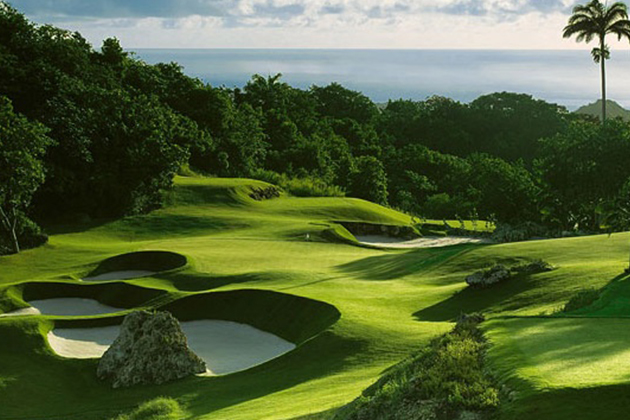 The par-72 layout features stunning views over the Caribbean Sea to the west and Atlantic Ocean to the east. Set within 475 acres of natural terrain and perched on one of the highest points of Barbados 1,000 feet above sea level, Apes Hill is the most elevated golf experience on the exquisite island.

Kirby’s visit followed an exclusive opening to the Apes Hill Barbados members and their guests on November 1. The course is planned to officially open during late 2023, barring unforeseen circumstances. Members who played Apes Hill say its playability, hole variety, and several new signature holes make it an exceptional golf experience.

Kirby, who has collaborated with design greats such as Robert Trent Jones and Jack Nicklaus in a distinguished career, is perhaps best known for his superlative work at Old Head Golf Links in Ireland.

Kirby’s work – aided by Justin Carlton and Gary Shapiro, two of the finest land shapers in the industry – began in 2019 and he has created a new Caribbean golfing masterpiece at Apes Hill Barbados.

The layout has been beautifully crafted around the surrounding landscape and indigenous tropical forests, with sustainability at the forefront of the resort’s long-term DNA to make it the most environmentally responsible golf course and resort development in the Caribbean. Underscoring its commitment to sustainability and conservation best practices, the Apes Hill Barbados golf course has become a member of Audubon International, the global leader in environmental sustainability certifications.

Fairways and tees have been re-laid using the more drought tolerant Zoysia Zorro grass and the greens with TifEagle. The resistance of these grasses to insects also further reduces the reliance on fertilization and use of pesticides, with a view to eventually becoming ‘chemical-free’.

Meanwhile, the construction of a reservoir that can hold up to 58 million gallons of rainwater will help fully irrigate the resort, with hundreds of trees, fruits and vegetables being planted around the property.

Playing the course for the first time since its reopening, members were struck by a layout set against remarkable topography that separates Apes Hill Barbados from any other course in the Caribbean. Kirby’s work has been hailed not only for the test he has created for better players, but also the scoring opportunities and variety which make it appealing to less accomplished and novice golfers.

The new layout stretches to 7,002 yards, although four teeing options make it playable for all levels with the shortest at 5,034. The holes weave seamlessly through the island’s natural surroundings, and robust Atlantic trade winds can influence the difficulty of play, bringing shorter tee boxes into consideration.

An exclusive and gentle opening has been designed to ease players into the course, with the second hole serving up an early birdie opportunity. A par four stretching to only 255 yards, it is still demanding of a well-placed drive should you wish to attack the green from the tee, with the putting surface heavily protected by bunkers, coral rock and a cascading creek.

While there is plenty to get excited about on the course’s outward nine – notably the fourth hole with its tee box positioned on one of the highest points of the course – the inward half delivers great excitement. Notably, the run from 12 to 15 – perhaps the most popular and stunning part of the layout – that sets up a grand finish as players reach the course’s signature hole at 16.

Named the ‘Cave’ with a coral rock hugging the hole behind the green and water lining the right, Kirby has left an indelible mark on Caribbean golf with a par 3 that possesses many characteristics for which Barbados is genetically famous for.

The course finishes with another short par 4 at hole 17, followed by a monstrous downhill par 5 on the home hole where a gully snakes along the left-hand side and round to the back of the green. It is a high-drama finish that is befitting of top-level championship golf.

To complement the work that has gone into Kirby’s ‘Caribbean Masterpiece’ and the championship routing, a state-of-the-art Performance Centre and floodlit driving range are due to open soon. A family friendly short course, with holes ranging from 95 to 150 yards, will open in 2023 while an additional 19th hole played to an island green, and a contemporary clubhouse are set to be completed during the first quarter of the year.

Guests will be able to enjoy a range of other amenities such as a fitness centre and health club, hiking and nature trails, eight flood-lit paddle and two tennis courts, while a world-class spa is also in development.