The European Tour victory came at the Nordea [Scandinavian] Masters where the 33-year-old Englishman used Nippon Shaft N.S.PRO MODUS³ Tour 105 steel shafts in his irons to win with a birdie on the first hole of a sudden death playoff.

Meanwhile on the LPGA Tour, the 24-year-old South Korean used Nippon Shaft’s N.S. PRO 950GH steel shafts in her irons and the N.S.PRO MODUS³ Wedge 105 shafts in her wedges to win the Indy Women in Tech Championship on the first hole of sudden death to reclaim her spot as No. 1 player in the world.

It was the champion’s third LPGA victory this year (including two majors) – and fifth overall in only two years on the tour. In regulation play, she shot 68-63-66-68—265 for a 23-under par total at Brickyard Crossing Golf Club in Indianapolis. She came back from a two-shot deficit over the final four holes before winning the playoff.

Nippon Shaft’s MODUS³ models now have won 20 times this year on pro tours around the world and for the 143rd time overall.

“Nippon Shaft is extremely proud to have had two winners on two of the world’s major professional tours,” said Hiro Fukuda, marketing and sales for Nippon Shaft. “Nippon Shaft continues to prove consistently that our shafts combined with a player’s hard work and dedication can lead to success at the game’s highest levels.”

Lamkin Helps Secure Victory and a ‘59’ For New Wyndham Champion

SAN DIEGO, CA – Lamkin Corporation – the original manufacturer of premium golf grips – would like to congratulate the winner of the Wyndham Championship on his wire to wire victory this weekend that included the PGA Tour’s tenth ever round of 59. This incredible performance marks the ninth Tour win for the long time Lamkin user all of which have come using his trusted Lamkin Crossline grips.

After his incredible 59 in the first round, the winner maintained control of his swing in challenging conditions that led to a third round that he had to finish after 7 holes because of the weather. With 29 holes to play on Sunday he continued his fantastic form, benefiting from a secure connection to his club in steamy conditions.

The iconic Crossline grip as used by the winner is Lamkin’s best-selling grip of all time and has delivered over $200,000,000 in Tour earnings. It features a distinctive, densely spaced pattern that promotes light grip tension and provides superior lateral traction. Lamkin’s proprietary rubber compound adds tackiness and durability, while the grip’s firmness delivers excellent torsion control. 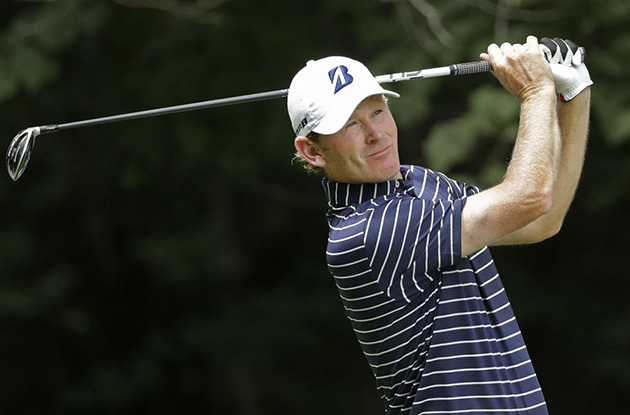 Snedeker led wire-to-wire after posting an opening round 59, becoming just the ninth player to ever shoot below 60 in an official PGA TOUR event. He trusted a variety of Bridgestone equipment to accomplish this feat and find the winner’s circle. This included the TOUR B X golf ball, a TOUR B JGR Prototype driver (9.5 degrees), J15 cavity back irons (4-P), J40 48 degree wedge, a pair of J15 Black Oxide wedges in 52 and 56 degrees, and the “Sneds” inspired e-Glove.

“To shoot 59 on Thursday, to be in the lead all week, to deal with that pressure every night and step up to the plate today and shoot 65 when I had to — means the world to me,” said Snedeker. “I’m playing my best golf of the year. Got a lot of huge events left, so I’m excited about the opportunity in front of me.”

The TOUR B JGR prototype driver utilized by Snedeker is the latest example of Bridgestone’s commitment to innovation and helping golfers of all skill levels maximize their performance. The driver is part of a new line of ground-breaking clubs that will be available at retail this Fall.

“Brandt has not only been a tremendous ambassador for Bridgestone for over a decade, but one of the most exciting and dynamic golfers in the world,” says Dan Murphy, President and CEO of Bridgestone Golf. “His round of 59 on Thursday was one of the most incredible things that Bridgestone Golf has ever been a part of. We tip our hat to Brandt on this amazing performance and encourage all golfers to follow his footsteps and get a Bridgestone ball fitting to help them find their edge.”

The TOUR B Series golf balls represent Bridgestone’s most technologically advanced models to date. During development, company engineers used data from more than three million in-person and online ball fittings, combined with insights from leading third-party industry sources, to identify needs of specific player types. They then drew on more than 800 golf ball patents to determine which proprietary technologies would most benefit each golfer persona identified.