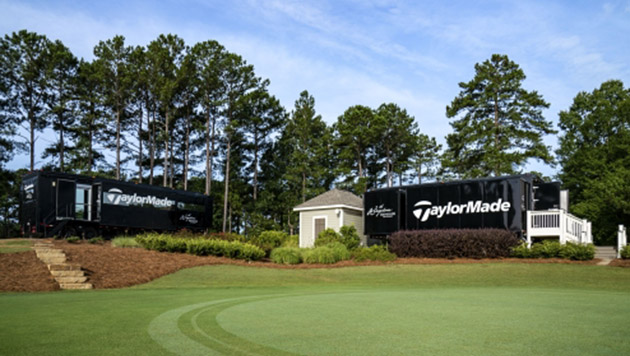 GREENSBORO, GA – Golf’s premier, total game-improvement retreat—located at Reynolds Lake Oconee, the six-course, destination-resort and private club located between Atlanta and Augusta, Ga.— has added a second clubfitting trailer, making it the only venue outside of PGA Tour tournament sites to have multiple trailers on property.

Rolling in another trailer is just one of the latest news items from this state-of-the-art facility, which recently underwent a name change and signed a three-year extension with TaylorMade. Now called The Kingdom at Reynolds Lake Oconee, it becomes one of only two elite TaylorMade club-fitting facilities in the U.S. (the other is at TaylorMade’s headquarters in Carlsbad, Calif.).

The new trailer comes to Reynolds Lake Oconee after 10 years on the PGA Tour, during which time it traveled an estimated 400,000 miles, attended more than 350 Tour events, and turned out approximately 75,000 clubs. The Kingdom’s current trailer spent six seasons on Tour, from 2002 through 2007, before parking itself for good at Reynolds Lake Oconee in 2008.

Trailer No. 2, which will be used solely for building metal woods and putters, is 42 feet long and weighs more than 22 tons. Inside, the trailer will house 800 club shafts, 700 metal wood and hybrid components, and 1,400 grips. The first trailer will be converted to manufacture only irons and wedges, and will hold 700 club shafts, 460 clubheads, and 1,200 grips.

Separating the club-building process into two trailers will make it much more efficient, allowing Reynolds’ expert fitters and builders to create a complete set of fitted clubs in a matter of hours and individual clubs even faster, while the customer waits.

Since opening in 2007, The Kingdom at Reynolds Lake Oconee has served as TaylorMade’s primary East Coast fitting center for PGA and LPGA touring professionals, mini-tour players, and elite junior, high school, and college players. More significantly, it is the only TaylorMade fitting venue in the country where recreational golfers have access to the same expertise and technology used by Team TaylorMade’s athletes and club professionals. (The California location is only open to corporate staff, TaylorMade athletes, and their guests.)

In 2019, customers from 20 states visited The Kingdom facility. That figure is sure to grow with the addition of the second TaylorMade Tour trailer.

Led by the PGA Champion, Golf Pride® Grips Are Trusted By 86% of the Field

PINEHURST, NC – Golf Pride® a division of power management company Eaton and an industry leader in grip innovation, today announced that it was the leading swing and putter grip brand in play at the 2020 PGA Championship, with 86% of the field trusting Golf Pride grips.

Nine players who finished in the Top 10 and ties, including the champion, chose Golf Pride at the demanding TPC Harding Park. The winner trusted Golf Pride’s Z Grip Cord en route to capturing his breakthrough career major.  In addition to touring professionals, 17 out of the 20 PGA Professionals who qualified to compete in the 2020 PGA Championship trusted their games to Golf Pride.

Golf Pride grips have been the choice for winners of the last 5 majors dating back to the 2019 Masters.  Validating the breadth of the portfolio, Golf Pride had in play 5 different performance technology models among the top 13 finishers. (Z Grip Cord, Tour Velvet Cord, Tour Velvet, MCC and Tour Wrap 2G)

“As the kickoff event in a run of 7 Majors scheduled over the next 12 months, we are thrilled to pick up where we left off and start this unique championship run with an exciting victory,” Brandon Sowell, global director of sales and marketing for Golf Pride. “We are honored that Golf Pride is trusted by so many of the world’s most discerning golfers and that we continue to play a role in the game’s biggest moments as a result.”