Though he was introduced to golf at a young age, the game didn’t get into Matt’s blood until he was in college.  Matt spent his first 18 years playing basketball and followed that with 4 years at Duke University where he worked for Coach Mike Krzyzewski and the Duke Men’s Basketball Team.  Matt learned many lessons about commitment and winning at the highest level which he has applied to his coaching.

During his time at Duke, Matt fell in love with the endless challenge that is golf.  He committed himself to practicing and improving his own game as well as learning everything he could about the golf swing.  He has spent countless hours following the latest research on the science of golf.

Matt has coached hundreds of golfers of all ability levels, from beginners to aspiring professionals.  In addition to being an accomplished coach, Matt’s knowledge of golf equipment and fitting is second to none.

Matt currently lives in the northwest suburbs of Chicago with his wife, two daughters, and dog. 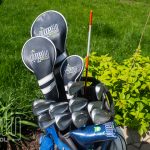